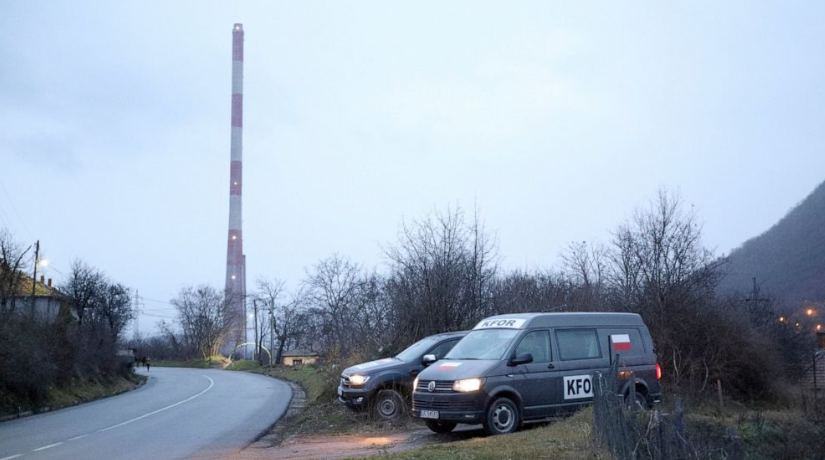 Shots and explosions rang out overnight in northern Kosovo, and ethnic Serbs have blocked roads with heavy vehicles and trucks

ons rang out and the Serbian president warned that Serbian troops are ready to defend their “homeland” if peace doesn’t prevail.

The roads in Serbia’s former province of Kosovo, which proclaimed independence in 2008, were blocked with heavy vehicles and trucks a day after Serbian President Aleksandar Vucic said he would ask the NATO-led peacekeeping force in Kosovo to permit the deployment of 1,000 Serb troops in the Serb-populated north of Kosovo, saying they are being harassed there.

The roadblocks, which Serbs say were erected to protest the recent arrest of a former Kosovo Serb police officer, came despite the postponement of the Dec. 18 municipal election opposed by Kosovo Serbs.

“Recent rhetoric from Serbia did the opposite. Suggesting sending Serbian forces to Kosovo is completely unacceptable. So are the latest attacks on EULEX,” she said.

Vucic said Sunday after a meeting of Serbia’s top security body that he will do everything to preserve peace, but that the army is ready to protect the minority Serbs in Kosovo.

“We have taken certain measures to protect our homeland,” Vucic told Serbia’s state RTS television. “I have issued orders and the National Security Council has accepted them. I am very proud of our soldiers and policemen. Before they receive orders … we will try for a million times to preserve peace,” he said.

Kosovo Prime Minister Albin Kurti accused Belgrade of trying to destabilize Kosovo. He said Serbia also is trying to bring an end to the EU-mediated dialogue on normalizing bilateral ties and take it to the United Nations Security Council, where Belgrade hopes to get support from Russia and China.

Kurti called on Kosovo’s Serbs “to distance themselves from the criminal groups and Vucic’s regime that is funding them and looking for a war.”

The European Union rule of law mission, known as EULEX, reported that a stun grenade was thrown at an EULEX reconnaissance patrol overnight. There were no injuries or damage.

EULEX, which has some 134 Polish, Italian and Lithuanian police officers deployed in the north, called on “those responsible to refrain from more provocative actions” and said it urged the Kosovo institutions “to bring the perpetrators to justice.”

European Union’s high representative, Josep Borrell, said the EU “will not tolerate attacks on EULEX or use of violent, criminal acts in the north.”

“Barricades must be removed immediately by groups of Kosovo Serbs,” he said on Twitter. “Calm must be restored … all actors must avoid escalation.”

Unidentified masked men were seen on the Serb barricades that blocked main roads leading to the border with Serbia, as Kosovo authorities closed two border crossings to all traffic and pedestrians.

An increased presence of Kosovar Albanian police in areas with a mixed population, as well as more international police and soldiers, were seen in the north on Sunday.

Serbia and Kosovo have intensified their war of words in recent days.

Vucic said Saturday that he would formally request permission from the NATO-led KFOR mission in Kosovo to deploy Serbian troops in northern Kosovo, while conceding that the request probably wouldn’t be granted.

Serbian officials claim a U.N. resolution that formally ended the country’s bloody crackdown against majority Kosovo Albanian separatists in 1999 allows for some 1,000 Serb troops to return to Kosovo. NATO bombed Serbia to end the war and push its troops out of Kosovo, which declared independence in 2008.

The NATO-led peacekeepers who have been deployed in Kosovo since the 1998-99 war would have to give a green light for Serb troops to go there. That’s highly unlikely because it would de-facto mean handing over security of Kosovo’s Serb-populated northern regions to Serbian forces — a move that could dramatically increase tensions in the Balkans.

“We do not want a conflict. We want peace and progress but we shall respond to aggression with all our powers,’ Kosovar Prime Minister Albin Kurti posted on social media.

Kurti told the European Union and the United States that they should “punish” Serbia for orchestrating the violence to “destabilize Kosovo.”

Tension in the north has been high this week ahead of the polls initially planned for Dec. 18. They have now been postponed to April 23 in an attempt to defuse the situation.

The election was due after ethnic Serb representatives resigned their posts in November to protest a decision by Kosovo’s government to ban Serbia-issued vehicle license plates.

Tensions have simmered in Kosovo ever since it proclaimed independence from Serbia, despite attempts by EU and U.S. officials to defuse them. Serbia, supported by its allies Russia and China, has refused to recognize Kosovo’s statehood.

Both Serbia and Kosovo want to join the EU but Brussels has warned they must resolve their dispute and normalize relations to be eligible for membership in the bloc.