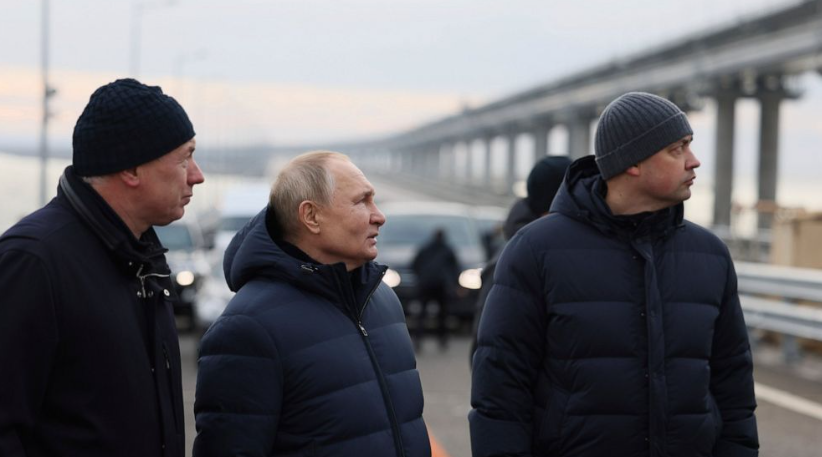 MOSCOW — Russian President Vladimir Putin tried to boost Russian morale Monday by driving a vehicle across a bridge to Crimea that a truck bomb had damaged in October.

Putin took the wheel of a Mercedes to drive across the bridge that links Russia’s mainland with the Crimean Peninsula, which Moscow annexed from Ukraine in 2014.

Like other Western automakers, Mercedes halted sales of vehicles to Russia and stopped production at its assembly plant near Moscow after the start of Russia’s military operation in Ukraine.

Kremlin spokesman Dmitry Peskov said Putin did not try to make a political point by driving the Mercedes and not a Russian-made Auris sedan, saying the president just used the car that was available.

While driving, Putin discussed the repairs of the Crimean Bridge with Marat Khusnullin, a deputy prime minister in charge of the project, an exchange that was broadcast by Russian television.

The president also spoke to workers involved in restoring the 19-kilometer (12-mile) bridge, which has been the main conduit for ferrying supplies to Crimea that has served as a key base for Russian military operations in Ukraine.

In view of Ukrainian threats to launch new attacks on the bridge, Putin emphasized the need to build a highway along the Sea of Azov coast to link Crimea with regions in southern Russia, the Kremlin said.

The Oct. 8 truck bomb attack disrupted travel on one of the two automobile lanes of the bridge. Russia blamed the attack on Ukrainian military intelligence and responded with several waves of strikes on Ukraine’s energy facilities and other key infrastructure.

Ukrainian authorities said there was another such barrage on Monday, hours after Russian media reported two explosions at air bases in Russia. One reportedly happened at a base that houses nuclear-capable strategic bombers that have been involved in launching strikes in Ukraine.