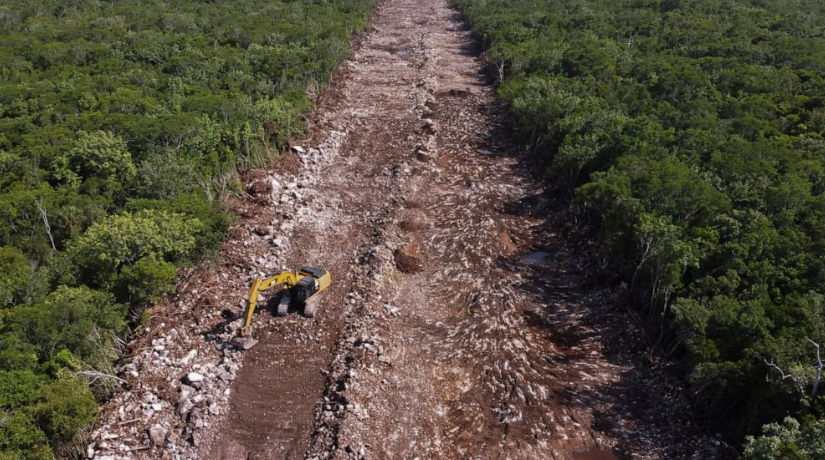 López Obrador has changed his mind a number of times on his pet project, which is intended to ferry tourists around the Yucatan peninsula. The project was initially supposed to run on an elevated line over the coastal highway, where most hotels are.

But opposition from hotel owners led him to change the route by cutting a 68-mile (110-kilometer) swath through the jungle between the resorts of Cancun and Tulum.

That faces opposition from environmentalists who say the train will crush or contaminate the network of caves and sinkhole lakes around the resorts of Tulum and Playa del Carmen.

And engineers worried the fragile, cave-ridden limestone soil will collapse under the weight of the high-speed train. But the president now says two-thirds of the line won’t touch the ground.

Instead, it will be elevated on thousands of 80-foot (25 meter) pilings sunk into the stony soil, supporting pre-fabricate elevated sections eight feet (2.5 meters) above the ground.

“This will have a minimal effect, because where they sink the pilots is where there isn’t anything,” López Obrador said.

Activists rejected the idea that the engineers could avoid caves when they sink the support columns, or that the train won’t have any impact, noting millions of trees have already been clear-cut for the project.

“They do not have the technical ability to sink the columns where there are no caves, because they (the caves) are everywhere,” said Jose ‘Pepe’ Urbina, a diver who has explored the caverns for decades.

He said the construction was already contaminating the normally crystalline water that flows through the cave systems in the Yucatan, which has no surface rivers and depends largely on the underground water.

The latest change also raised doubts about whether such an elevated trackway — which López Obrador said will include a 260-foot (80 meter) suspension bridge over one particularly extensive cavern — can be completed as the president has promised within one year.

The 950-mile (1,500-kilometer) Maya Train line is meant to run in a rough loop around the Yucatan Peninsula, connecting beach resorts and archaeological sites.

Some of the oldest human remains in North America have been discovered in the sinkhole caves known as “cenotes” on the country’s Caribbean coast, which were often dry and frequented by humans as long as 13,000 years ago.