Turkey strikes in Syria, Iraq a week after Istanbul bombing 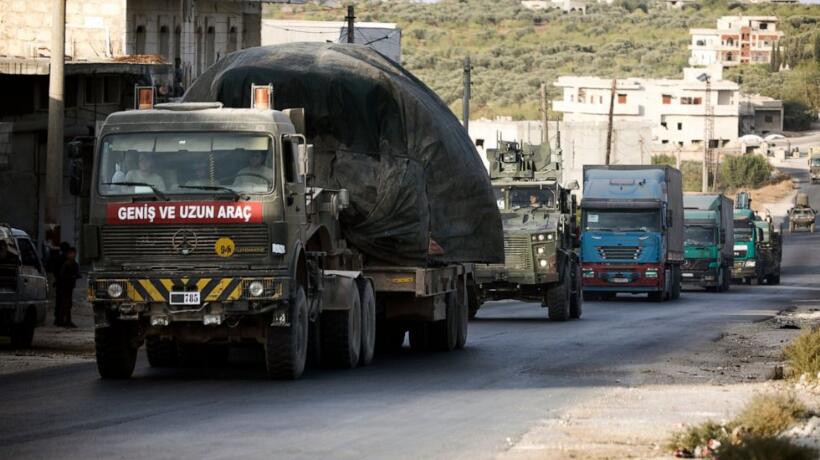 Warplanes attacked bases of the outlawed Kurdistan Workers’ Party, or PKK, and the Syrian People’s Protection Units, or YPG, the ministry said in a statement, which was accompanied by images of F-16 jets taking off and footage of a strike from an aerial drone.

The ministry cited Turkey’s right to self defense under Article 51 of the United Nations Charter in launching an operation it called Claw-Sword late Saturday. It said it was targeting areas “used as a base by terrorists in their attacks on our country.”

The airstrikes came after a bomb rocked a bustling avenue in the heart of Istanbul on Nov. 13, killing six people and wounding over 80 others. Turkish authorities blamed the attack on the PKK and its Syrian affiliate the YPG. The Kurdish militant groups have, however, denied involvement.

Ankara and Washington both consider the PKK a terror group, but disagree on the status of the YPG. Under the banner of the Syrian Democratic Forces, the YPG has been allied with the U.S. in the fight against the Islamic State group in Syria.

The PKK has fought an armed insurgency in Turkey since 1984. The conflict has killed tens of thousands of people since then.

Following the strikes, the Defense Ministry posted a photo of an F-16 fighter plane with the phrase, “Payback time! The scoundrels are being held to account for their treacherous attacks.” The DHA news agency reported that F-16s took off from airfields in Malatya and Diyarbakir in southern Turkey while drones were launched from Batman.

The ministry claimed that a total of 89 targets were destroyed and a “large number” of what it designated “terrorists” were killed in strikes that ranged from Tall Rifat in northwest Syria to the Qandil mountains in Iraq’s northeast.

Defense Minister Hulusi Akar oversaw the airstrikes from an operations center and congratulated pilots and ground staff. “Our aim is to ensure the security of our 85 million citizens and our borders and to retaliate for any treacherous attack on our country,” he said, according to a ministry statement.

Akar claimed that a wide range of targets “were destroyed with great success,” including what he described as the “the so-called headquarters of the terrorist organization,” without giving further details.

Other Turkish officials responded to the attacks. Presidential spokesman Ibrahim Kalin tweeted a photograph of the Turkish flag with the comment “Payback time for Istiklal” — a reference to the street where last week’s bombing happened.

The airstrikes targeted Kobani, a strategic Kurdish-majority Syrian town near the Turkish border that Ankara had previously attempted to take in its plans to establish a “safe zone” along northern Syria.

Syrian Democratic Forces spokesperson Farhad Shami in a tweet said that two villages heavily populated with displaced people were under Turkish bombardment. He said the strikes had resulted in 11 civilian deaths and destroyed a hospital, a power plant and grain silos.

In the Syrian town of Derik, which lies where the borders of Syria, Iraq and Turkey meet, The Associated Press found a burnt out petrol station with destroyed buildings nearby.

“There were Turkish airstrikes here, approximately five strikes,” said Abdulgafar Ali, an employee at the petrol station. “The bombardment caused mass destruction. It shut down the station completely and resulted in the killing and injuring of innocent civilians, who committed no sin.”

The Women’s Protection Units, or YPJ, which is linked to the YPG, said the airstrikes targeted areas along the Turkey-Syria border including Kobani, Derbasiyeh and Ein Issa. “The airstrikes are random that target the people,” the YPJ media office said in written response to The Associated Press.

“The people who fought the Daesh terrorist organization are now under attack by Turkish warplanes,” it said, using an Arabic acronym to refer to the Islamic State group.

The Britain-based Syrian Observatory for Human Rights, an opposition war monitor, reported that the strikes had also hit Syrian army positions and that at least 12 had been killed, including SDF and Syrian soldiers.

The observatory said about 25 airstrikes were carried out by Turkish warplanes on sites in the countryside of Aleppo, Raqqa and Hasakah.

In neighboring Iraq, officials of the Kurdistan Regional Government said at least 32 PKK militants had been killed in 25 air raids.

The Kurdish-led authority in northeast Syria said Saturday that if Turkey attacks, then fighters in the area would have “the right to resist and defend our areas in a major way that will take the region into a long war.”

SDF commander Mazloum Abdi called on people to remain at home and abide by security forces’ instructions. “We are making every effort to avoid a major catastrophe. If war erupts, all will be affected,” he tweeted.

An SDF statement later said the attacks “will not remain unanswered. At the appropriate time and place, we will respond in a strong and effective manner.”

Turkey’s state-run Anadolu news agency reported that a Turkish soldier and two police officers were later wounded in a rocket attack on the Oncupinar border gate with Syria.

It emerged that Erdogan gave the order for the airstrikes as he was returning from the G-20 meeting of world leaders in Indonesia on Thursday. The president’s office released images of Erdogan being briefed on his plane by Akar.

Later on Sunday Erdogan, accompanied by a clutch of officials including Akar, left Turkey for the World Cup opening ceremony in Qatar.

Turkey has invaded northern Syria three times since 2016 and already controls some territories in the north. Earlier this year, Erdogan threatened another military operation in the border area.

Turkish forces launched a fresh ground and air operation, dubbed Claw-Lock, against the PKK in northern Iraq in April.