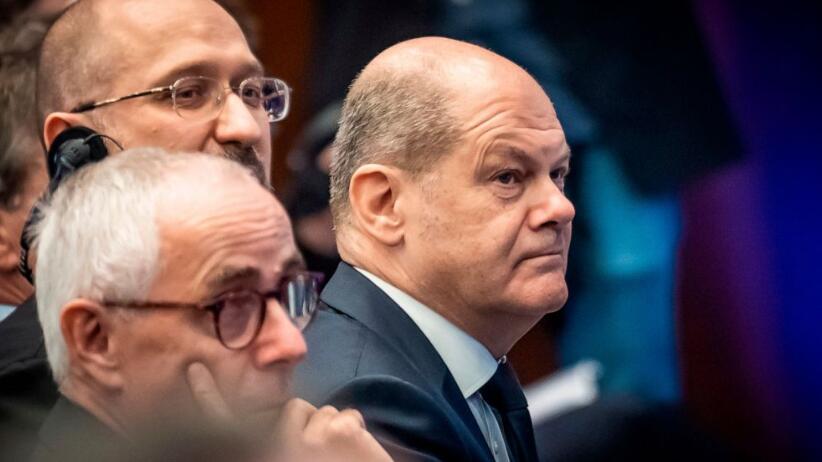 French President Emmanuel Macron and German Chancellor Olaf Scholz thrashed it out for three hours in Paris in hopes of bridging gaps between the two neighbors and key EU allies on energy, defense and the economy

PARIS — French President Emmanuel Macron and German Chancellor Olaf Scholz thrashed it out for three hours in Paris on Wednesday in hopes of bridging gaps between the two neighbors and key European Union allies on issues including energy, defense and the economy.

Macron and Scholz discussed their differences over a working lunch at the Elysee presidential palace. In a tweet, Scholz called the meeting on European energy supply, rising prices and joint defense projects “very good and important.”

“Germany and France stand close together and are approaching the challenges together,” Scholz added.

Officials from both countries stressed the two leaders’ forged a broad agreement on which direction they want to see developments heading even as Europe struggles with the consequences of the war in Ukraine. The officials, who spoke on condition of anonymity because they’re not authorized to speak about the meeting publicly, did not disclose details.

The French presidency hailed the talks as “constructive,” adding that Macron and Scholz focused on forging a “close working relationship” on issues over the middle and long-term.

The leaders agreed to set up working groups on the three key issues of energy, defense and innovation, the French presidency said.

In an interview on France 2 television Wednesday evening, Macron said he discussed with Scholz the idea of a tax credit aimed at encouraging Europeans to buy electric vehicles built on the continent, on the model of the recent measure applied in the U.S.

France and Germany, both major car manufacturers, must “get together” on this subject, Macron said, adding that he saw some “true convergence” with Scholz to move forward on the issue.

“I never believed in Europe as an open supermarket,” he said. “So yes, we must protect our industry and keep the aids for vehicles that are made in Europe.”

Initially, a French-German joint Cabinet meeting had been scheduled Wednesday as well, but it was postponed until January. The governments in Paris and Berlin both said they needed more time to reach consensus on some bilateral issues.

French-German government meetings are usually held at least once a year to coordinate policies. The last one was held in May 2021 via videoconference due to the COVID-19 pandemic.

French government spokesman Olivier Veran said Scholz’ s visit shows both countries’ ability “sometimes to be able to get over difficulties … when the priorities of one country do not necessarily converge with the priorities of the other.”

“The strength of the French-German couple is to always be able to get along together and move Europe forward,” he added.

French-German divergences are not unusual. The countries, home to the eurozone’s biggest economies, are used to having different stances on defense, energy and other topics.

“My wish has always been to preserve European unity and also the friendship and the alliance between France and Germany,” Macron said last week in Brussels before an EU meeting. “I think it’s not good for Germany nor for Europe that it isolates itself,” he added.

Asked Friday about the apparent tensions, Scholz said that cooperation with France is “very intensive” and stressed that he holds frequent meetings with Macron.

“There are questions on which we have common points of view and drive things forward,” he said. “You can see, for example, that it is Germany and France who repeatedly look at how we can achieve progress to support Ukraine.”

Some other EU member states have criticized Germany in recent months for defending its own national interests over European priorities.

Many, including France and Italy, pointed to the lack of coordination with Germany over its 200 billion euro ($199 billion) subsidy plan to help households and businesses cope with high energy prices.

Some eastern European countries criticized Berlin for being too slow in providing weapons to Ukraine. Poland and the Baltic countries expressed concerns when Germany appeared to hesitate on granting Ukraine candidate status for EU membership.

Berlin and Paris have a decades-long history of bilateral irritants and European disputes that coexist with the countries’ friendship and cooperation.

France and Germany have been described as the “motor” of the EU. They have always found compromises even in difficult terrain since they co-founded, with four other countries, the forerunner of the EU in 1957.

They will celebrate in January the 60th anniversary of the Elysee Treaty that set the tone for the two countries’ relations after centuries of fierce rivalry and bloody conflict.

Last week, as EU leaders were seeking a deal to make sure the runaway cost of gas doesn’t further tank struggling EU economies, Germany and France were in opposing camps — Berlin expressing doubts and holding off plans for a price cap, while most others wanted to push on.

Scholz said any dispute was on the method, not the goal.

Defense also has been a recurrent issue, with Paris considering Berlin was not doing enough in the area for years — until the war in Ukraine led Germany to announce a major boost to military spending.

France did not join the project. The French Mamba system is already part of NATO’s integrated air and missile defense.