Venezuelans halted in Panama by US policy change return home 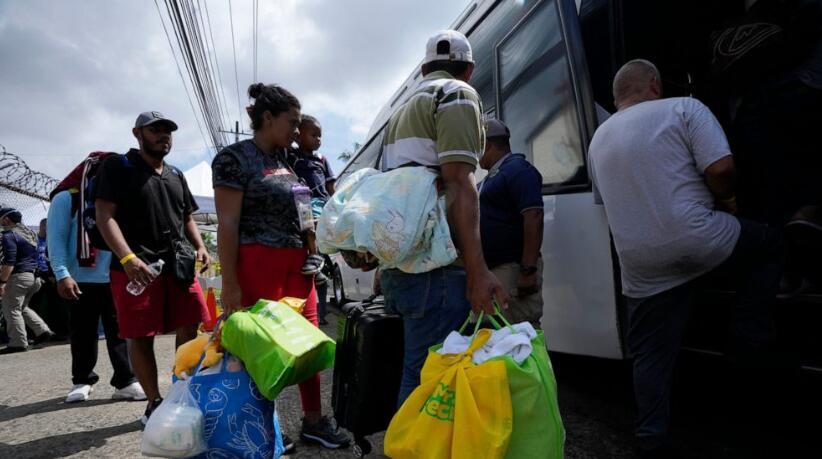 With dashed dreams and empty hands, hundreds of Venezuelan migrants are stranded in Panama’s capital looking for a way home after surviving the crossing of the Darien Gap only to find that a United States policy change had closed the border to them

PANAMA CITY — With dashed dreams and empty hands, hundreds of Venezuelan migrants are stranded in Panama’s capital looking for a way home after surviving the crossing of the Darien Gap only to find that a United States policy change had closed the border to them.

In a warehouse the government converted to shelter them in downtown Panama City, Venezuelans explained how they were devastated by the news as they emerged from the dense jungle that separates Panama and Colombia.

Earlier this month, the Biden administration announced that it would accept up to 24,000 Venezuelans at airports while returning those who attempted to cross the southwest border to Mexico. The policy change shut the door on Venezuelan asylum seekers, many of whom previously were being paroled into the United States.

Jorge Lizcano, a 31-year-old Venezuelan who had left Táchira with a group of 17 people, including his brother, a cousin and a friend, said they had reached a camp in Panama near the Caribbean coast when they received their first signal of the crossing and immediately confronted news of the change.

“We turned on our cell phones to let family know that we were well and … the only news that arrived to us was that they had closed the border, that there were no more opportunities,” Lizcano said. “It destroyed us.”

They decided to trudge on, hoping that by the time they got out of the jungle the news would have changed. “In that moment we didn’t believe it, we thought it was a lie. We began to call relatives in the United States, in Chile and they us yes, it was true. In that moment we hung our heads, cried.”

The group eventually made it out to a United Nations camp.

Half of the group arrived at the shelter in the capital, which is being managed by Venezuela’s consulate, on Monday. Lizcano’s brother, cousin and friend already returned to Venezuela on flights. Lizacano was waiting for a humanitarian flight because he had no money left and hoped to be able to spend the holidays with his wife and children.

“The only option is to go back to Venezuela and face reality … the good part is that my mother, my father, my children are waiting there and I think that is something that will help me move on. We all lost the little that we had.”

Some 900 Venezuelans have returned on charter flights from Panama since the U.S. policy change, according to Panama’s National Immigration Service. The Venezuelan government is charging $280 for the flights back, according to migrants interviewed at the shelter. Those who can’t hope nongovernmental organizations will cover the cost.

According to government data, some 206,000 migrants have crossed the Darien Gap this year, 170,000 of them Venezuelans.

The U.S. policy change was driven by a surge in Venezuelans arriving at the U.S. border that put them second only to Mexicans this year. In September, U.S. border agents reported nearly 34,000 encounters with Venezuelans, according to U.S. Customs and Border Protection data.

U.S. and Mexican officials gave the first update on the program last Friday: 7,500 applications were being processed and the first 100 Venezuelans had been approved to fly. Biden administration officials said about 150 Venezuelans were crossing the border from Mexico daily, down from about 1,200 before the policy was announced Oct. 12.

The first four Venezuelans paroled into the United States arrived Saturday — two from Mexico, one from Guatemala, one from Peru — and hundreds more have been approved to fly, the U.S. Homeland Security Department said. The program, which requires pre-registration online and that applicants have a sponsor in the United States, is similar to one set up for Ukrainians earlier this year.

José Gregorio Baez, a 24-year-old Venezuelan from Carabobo, said he was crossing Nicaragua when he heard of the policy change and pushed on until the Guatemalan border when he finally gave up.

“I didn’t continue because it meant continuing to lose money, because with the news that they closed (the border) there I decided it was better to go back and now I’m looking for a flight home.”