In Ukraine, power plant workers fight to save their ‘child’ 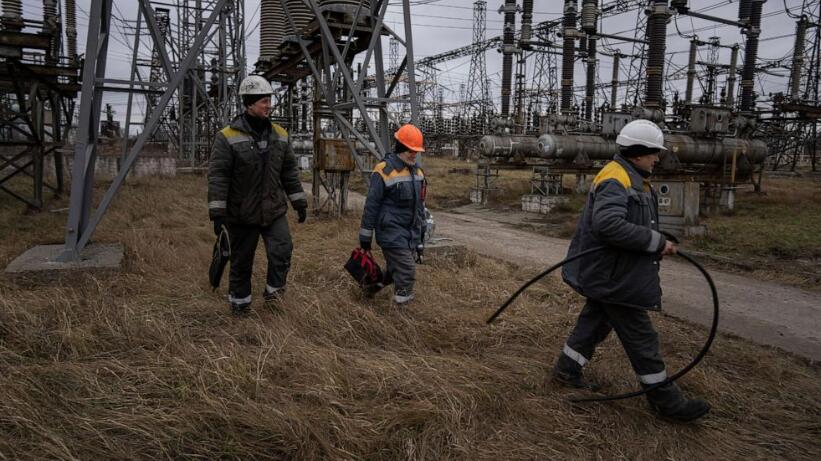 When Ukraine was at peace, its energy workers were largely unheralded

A POWER PLANT, Ukraine — Around some of their precious transformers — the ones that still work, buzzing with electricity — the power plant workers have built protective shields using giant concrete blocks, so they have a better chance of surviving the next Russian missile bombardment.

Blasted out windows in the power plant’s control room are patched up with chipboard and piled-up sandbags, so the operators who man the desks 24/7, keeping watch over gauges, screens, lights and knobs, are less at risk of being killed or injured by murderous shrapnel.

“As long as there is equipment that can be repaired, we will work,” said the director of the plant that a team of Associated Press journalists got rare access to.

The AP is not identifying the plant nor giving its location, because Ukrainian officials said such details could help Russian military planners. The plant’s director and his workers also refused to be identified with their full names, for the same reason.

Because the plant can’t function without them, the operators have readied armored vests and helmets to wear during the deadly hails of missiles, so they can stay at their posts and not join less essential workers in the bomb shelter.

And yet, against the odds and sometimes at the cost of their lives, they keep power flowing. They’re holding battered plants together with bravery, dedication, ingenuity and dwindling stocks of spare parts. Each additional watt of electricity they manage to wring into the power grid defies Russian President Vladimir Putin’s nearly 11-month invasion and his military’s efforts to weaponize winter by plunging Ukrainians into the cold and dark.

In their minds, the plant is more than just a place where power is made. Over decades of caring for its innards of whirring turbines, thick cables and humming pipes, it’s become something they have come to love and that they desperately want to keep alive. Seeing it slowly but systematically wounded by repeated Russian attacks is painful for them.

“The station is like an organism, each organ in it has some significance. But too many organs are already damaged,” said Oleh. He has worked at the plant for 23 years.

“It hurts me so much to watch all this. This is inhuman stress. We carried this station in our arms like a child,” he said.

Successive waves of Russian missile and exploding drone attacks since September have destroyed and damaged about half of Ukraine’s energy system, the government says. Rolling power cuts have become the norm across the country, with tens of millions of people now getting by with only intermittent power, sometimes just a few hours each day. The bombardments have also forced Ukraine to stop exporting electricity to neighbors Slovakia, Romania, Hungary, Poland and Moldova.

Russia has said the strikes are aimed at weakening Ukraine’s ability to defend itself. Western officials say the suffering the blackouts cause for civilians is a war crime.

The plant that AP’s team visited has been struck repeatedly and heavily damaged. It still powers thousands of homes and industries, but its output is down significantly from pre-invasion levels, its workers say.

All parts of the facility bear scars. Missile fragments are scattered around, left where they landed by workers too busy to clear up. Workers say their families send them off to their shifts with the words: “May God protect you.”

Mykola survived one of the strikes. He started work at the plant 36 years ago, when Ukraine was still part of the Soviet Union.

“The windows flew out instantly, and dust began to pour from the ceiling,” he recalled. So he could immediately assess the damage, he put on his armored vest and helmet and ventured outside rather than taking cover in the bomb shelter.

“We have no fear,” Mykola said. “We’re more scared for the equipment that is needed to provide light and heat.”

Russian missile targeters seem to be learning as they go along, adapting their tactics to cause more damage, Oleh said. Missiles used to detonate at ground level, blasting out craters, but now they explode in the air, causing damage over wider areas.

As soon as it’s safe, the plant’s repair teams scramble — a dispiriting cycle of destruction and rebirth.