Why the Qatar soccer World Cup is so controversial 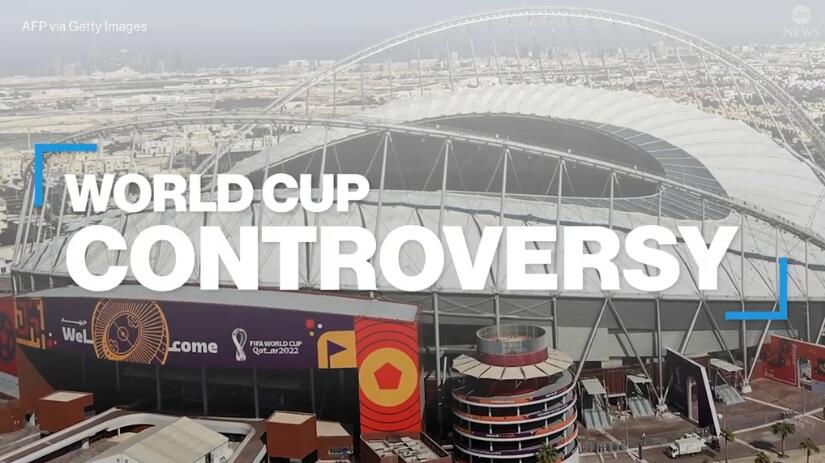 The tournament promises to be one of the most scrutinized ever.

LONDON and DOHA — The first soccer World Cup ever to be held in the Middle East begins on Sunday, but never before has the biggest tournament of the planet’s most watched sport been shrouded in so much controversy.

The criticism stretches back more than a decade when the decision to award this year’s tournament to Qatar was made in 2010 by FIFA, soccer’s global governing body. Since then, heavy scrutiny has been applied by both legal authorities and human rights groups to both the circumstances around the bid, and also the country’s fitness to host soccer’s premiere competition.

Qatar is by no means the first controversial host of a global sporting competition. This century alone, China has played host to two Olympiads despite major human rights concerns, and the previous World Cup hosts in 2018, Russia, have also hosted the Winter Olympics, even after a series of diplomatic crises and the fallout of the illegal annexation of Crimea in 2014. But, by far, the most controversial was the 1936 Olympics, hosted in Nazi Germany.

The term “sportswashing” has repeatedly been used by analysts in connection with the upcoming World Cup. Some suggest the awards of these internationally celebrated tournaments have allowed the hosts to integrate themselves into the world’s conscience and become arbiters of sporting fair play despite accusations of human rights issues and abuses.

Qatari officials have rejected plenty of the criticism levelled its way, insisting the event will be fair and open. Organizers have said that there have been major improvements in the rights of migrant workers in the country, and they have kept sustainability at the heart of their planning at all times. Meanwhile, Qatari officials have alluded to anti-Arab bias in the reporting of the World Cup.

The controversy has centered around three major areas: allegations of corruption at the heart of FIFA, human rights in Qatar and climate concerns, despite organizers’ pledge that the event be carbon neutral.

At the time, the award of the World Cup to Qatar in 2010 was not without controversy. Unlike other previous hosts, the country had little soccer infrastructure in terms of stadia and training facilities, and there were concerns about the soaring temperatures for a tournament usually held in the summer.

But in 2014, a report from FIFA’s ethics committee found that despite allegations of bribery, there had been no wrongdoing. The report was made public three years later, stating that “no evidence of any improper activity by the bid team or any football officials has been uncovered” and as a result “no further action would be taken.”

But the report did not put the controversy to bed. A number of lawsuits have been filed against FIFA officials alleging corruption in recent years, including relating to the award of Qatar with the 2022 World Cup.

According to charges filed by the DOJ in 2015 against several high-profile former FIFA executives, “several executive committee members were offered or received bribes in connection with their votes” on both Russia’s 2018 and Qatar’s 2022 World Cup.

The current FIFA leadership have sought to distance themselves from their predecessors. The charges against the named individuals have not been resolved.

Even with top former officials facing charges of corruption, FIFA was awarded $32 million as a victim of corruption by the Justice Department in 2021, meaning the organization was a victim of alleged financial wrongdoing when funds were wrongly paid to individuals.

Both Qatar and FIFA have denied any wrongdoing.

FIFA’s president at the time of the World Cup was awarded to Qatar, Sepp Blatter, told Swiss newspaper group Tameida that picking Qatar was a “mistake.”

“It’s a country that’s too small,” he said. “It was a bad choice. And I was responsible for that as president at the time.”

Blatter did not address the allegations of corruption in the interview, but he has not been specifically accused of wrongdoing in the Qatar bid.

In order to play host to the 32-nation tournament, Qatar, an energy-rich nation roughly the size of Connecticut, embarked on a major construction project. An estimated 95% of the country’s labor force is made up of migrants, and Qatar has been accused of widespread abuses in how it treats its migrant workers, including those specifically working on the World Cup.

An investigation by The Guardian newspaper reported that over 6,500 migrant workers from India, Pakistan, Sri Lanka, Nepal and Bangladesh have died in Qatar since 2012. Thirty-seven of those deaths were directly linked to the construction of World Cup stadia, according to the investigation which has not independently been confirmed by ABC News.

“The mortality rate among these communities is within the expected range for the size and demographics of the population. However, every lost life is a tragedy, and no effort is spared in trying to prevent every death in our country,” the Qatari government reportedly said in a statement to the Guardian.

Despite the international outcry, FIFA has defended Qatar from the criticism. Gianni Infantino, the current FIFA president said that migrant workers gain “dignity and pride” from working on Qatari infrastructure despite migrant deaths.

In May of this year, at a summit hosted by the Milen Institute, a U.S. think tank, Infantino said: “6,000 might have died in other works and so on and of course, FIFA’s not the police of the world or responsible for everything that happens around the world. But thanks to FIFA, thanks to football, we have been able to address the status of all the 1.5 million workers in Qatar.”

Migrant rights are not the only human rights concerns. Same-sex relationships are criminalized in Qatar’s Penal Code, and can carry a prison sentence. Human Rights Watch has also reported that authorities have erratically been arresting LGBTQ people and subjecting them to poor treatment in detention. Fans groups and human rights organizations have expressed concern about the status of LGBTQ+ fans attending the tournament.

Salman has since retracted the statement saying he was quoted “out of context.”

Nasser al-Khater, CEO of Qatar 22, addressed the concerns of LGBTQ fans concerns about going to Qatar in a recent interview with Al Jazeera.

The state’s male guardianship laws have also been credited with severely restricting women’s freedoms in the country, according to Human Rights Watch. The NGO found that women in the country required permission from male guardians in order to go about many aspects of their lives, such as marry, take certain jobs and travel abroad until a certain age, which they say is in violation of Qatari and international law.

Qatar and FIFA pledged that they would deliver the world’s first “fully carbon-neutral FIFA World Cup tournament.” Nasser al-Khater, CEO of Qatar 2022, said the Gulf nation is “very proud” of the work they have done regarding sustainability, which includes plans for state-of-the-art air-conditioned stadiums and the planting of thousands of trees.

Though the tournament is projected to emit a total of 3.6 million tons of carbon dioxide according to FIFA , they said 95% of those emissions will come from air travel, and are classified as “indirect emissions.”

However, climate researchers have cast doubt on the credibility of Qatar’s claim of a “carbon-neutral” tournament, arguing that the Gulf nation has underestimated the event’s true emission output and climate impact. Critics further point out that Qatar is utilizing purchasing carbon credits, a questionable practice, in order to claim it’s meeting sustainability goals.

“This is not a harmless exercise, as it misleads players, fans, sponsors and the public into believing that their involvement in the event will come at no cost to the climate,” said Belgian NGO Climate Market Watch.

FIFA received criticism from national football associations earlier this month, after they were sent a letter telling them to “stick to football.” The widely reported letter, signed by Infantino and Secretary General Fatma Samoura, said: “Please, let’s now focus on the football!” They asked the 32 competing federations to “not allow football to be dragged into every ideological or political battle that exists.”

In an apparent response, the UEFA (European soccer’s governing body) Working Group on Human Rights and Labour reiterated their commitment to human rights and a compensation fund for migrant workers. Human rights organizations have said that FIFA and Qatari should pay the compensation.

The criticism may not stop when the tournament gets underway this weekend as these controversies threaten to overshadow the world’s biggest sporting event. The management of several teams, such as England and Australia, have said they will not hide away from talking about the issues at hand at the controversial World Cup.