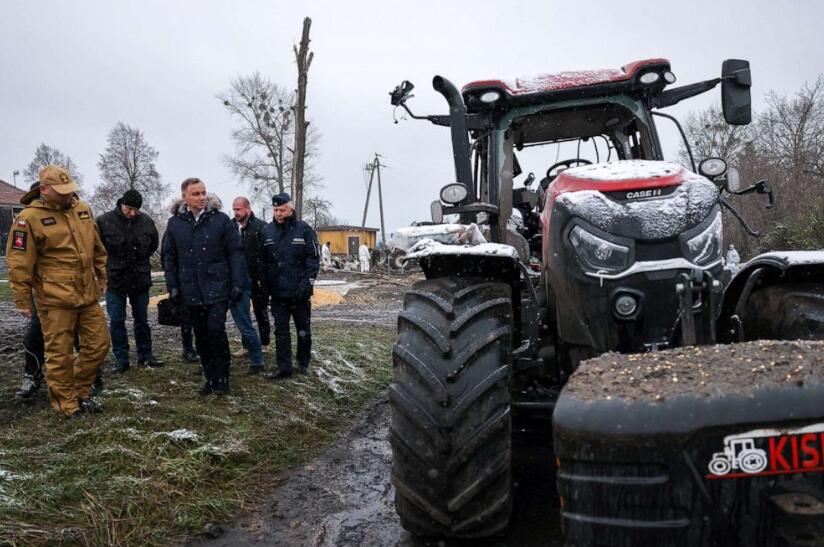 The strike killed two in the Polish farming village of Przewodow.

Polish officials granted Ukrainian investigators access on Thursday to the site of the missile strike that hit a Polish village and killed two people earlier in the week.

“I have no doubt that it was not our rocket,” Zelenskyy told reporters. He said Ukraine should be a party to the investigation over the strike

But U.S. Defense Secretary Lloyd Austin in an on-camera briefing Wednesday said there’s “nothing that contradicts President Duda’s preliminary assessment that this explosion was most likely the result of a Ukrainian air defense missile that unfortunately landed in Poland.”

After arriving at the White House early Thursday morning, President Joe Biden was asked for his reaction to Zelenskyy denying that the missile that landed in Poland was Ukrainian. “That’s not the evidence,” Biden responded.

U.S. Secretary of State Antony Blinken evaded questions from reporters about the disconnect between Ukraine and Western powers on the origin of the missile, saying he couldn’t get ahead of the investigation and that officials are still gathering information. Blinken also said allies are in regular contact with Ukraine and are sharing the information they have.

“President Zelenskyy has been in touch with the Polish president himself to clarify the facts. The chair of Ukraine’s National Security and Defense Council said that Ukraine is pursuing a comprehensive analysis of what happened. So we also have among all of us–Ukraine, Poland, the United States, our NATO allies, G7 Partners–a commitment to follow the facts,” Blinken told reporters Thursday.

According to a Polish official, Duda sees “no obstacles” for Ukrainian observers to take part in an investigation into the causes of the missile blast. The decision will ultimately depend on the agreement with other members of the NATO alliance, said Jacek Siewiera, the head of the Polish National Security Office, in an interview on radio RMF FM Thursday.

The missile caused an explosion Tuesday about 10 miles from the Polish-Ukrainian border, in the farming village of Przewodow, killing the owner of a granary that was struck and a tractor driver who was transferring maize and corn to the facility, according to Poland’s Law and Justice Ministry.

In response to the incident, Polish Prime Minister Mateusz Morawiecki on Tuesday called an urgent meeting with the Polish Committee of the Council of Ministers for National Security and Defense Affairs. Duda said the NATO ally also strengthened the readiness of the Polish armed forces, including air defenses.

The Polish foreign minister also summoned the Russian envoy to explain the explosion near the Ukrainian border.

The incident came on the same day Russian forces fired 90 missiles into Ukraine, affecting power systems, enterprises and residential buildings, according to Zelenskyy.

Russia denied responsibility for the missiles that landed in Poland. After Polish authorities released images from the site, Russia’s Defense Ministry claimed the wreckage was elements of an S-300 anti-aircraft guided missile, which it claimed is used by the Ukrainian Air Force.

Duda said that it was probably a Russian-made S-300 missile, but that there is no evidence that it was a missile launched by the Russians.

Russia claimed that its precision strikes were carried out on targets within Ukrainian territory and at a distance no closer than 35 km from the Ukrainian-Polish border.

The U.S. has experts on the ground assisting with the Polish-led investigation, Austin said Wednesday.

There is a debris field in Poland and other forms of data are going to be available from various technical means. Officials are expected to have confirmed data as to the point of origin, point of impact and what the angle of the weapon system was the flight trajectory “shortly,” Chairman of the Joint Chiefs of Staff Gen. Mark Milley told reporters Wednesday.

After he was briefed on the incident, President Joe Biden spoke with Duda and NATO Secretary General Jens Stoltenberg on Tuesday.

Biden expressed “deep condolences for the loss of life in Eastern Poland” and offered “full U.S. support for and assistance with Poland’s investigation,” the White House said in a statement.

Hours after the explosion, the White House held an emergency roundtable meeting with G-7 and NATO world leaders in Bali, Indonesia regarding the explosion in Poland. Biden met with leaders of Germany, Canada, France, Italy, Japan, Spain, the Netherlands, the U.K. and the EU.

After the meeting, Biden told reporters it is “unlikely” that the missile that hit Poland was fired from Russia and said leaders would support the investigation into what happened.

“I’m going to make sure we find out exactly what happened,” Biden said.

Biden also said that recent Russian missile attacks on Ukraine have been “totally unconscionable” and were a point of discussion at the meeting. The White House also condemned the attacks on Ukrainian cities and civilian infrastructure, calling them “barbaric.”

However, Austin and the White House blamed Russia on Wednesday for the ongoing conflict.

“Whatever the final conclusions may be, the world knows that Russia bears ultimate responsibility for this incident, which launched another barrage of missiles against Ukraine specifically intended to target Ukraine’s civilian infrastructure,” Austin said.