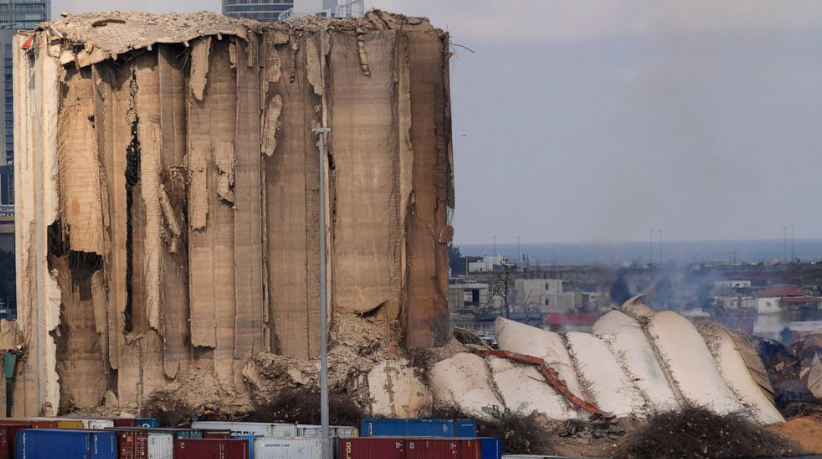 BEIRUT — Another significant section of the devastated Beirut Port silos collapsed on Tuesday morning in a cloud of dust. No injuries were reported — the area had been long evacuated — but the collapse was another painful reminder of the horrific August 2020 explosion.

The collapse left the silos’ southern part standing next to a pile of charred ruins. The northern block had already been slowly tipping over since the initial explosion two years ago but rapidly deteriorated after it caught fire over a month ago due to fermenting grains.

The 50 year old, 48 meter (157 feet) tall silos had withstood the force of the explosion on Aug. 4, 2020, effectively shielding the western part of Beirut from the blast that killed over 200 people, injured more than 6,000 and badly damaged entire neighborhoods.

Emmanuel Durand, a French civil engineer who volunteered for the government-commissioned team of experts, told The Associated Press that the speed of the tilt rapidly accelerated overnight on Monday, just hours before the collapse.

“There was a very sharp acceleration, which was expected,” Durand explained. “When this happens, you know it’s going to go.”

The country’s caretaker environment minister, Nasser Yassin, told Lebanese TV that the government will now look into how to ensure the southern block remains standing. He urged residents near the port to wear masks, and said experts would conduct air quality tests.

In April, the Lebanese government decided to demolish the silos, but suspended the decision following protests from families of the blast’s victims and survivors. They contend that the silos may contain evidence useful for the judicial probe, and that it should stand as a memorial for the 2020 tragedy.

In July, a fire broke out in the northern block of the silos due to the fermenting grains. Firefighters and Lebanese Army soldiers were unable to put it out and it smoldered for over a month. Officials had warned that the silo could collapse, but feared risking the lives of firefighters and soldiers who struggled to get too close to put out the blaze or drop containers of water from helicopters.

Survivors of the blast and residents near the port have told the AP that watching the fire from their homes and offices was like reliving the trauma from the port blast, which started with a fire in a warehouse near the silos that contained hundreds of tons of explosive ammonium nitrate, improperly stored there for years.

The environment and health ministries in late July issued instructions to residents living near the port to stay indoors in well-ventilated spaces.

Durand last month told the AP that the fire from the grains had sped up the speed of the tilt of the shredded silo and caused irreversible damage to its weak concrete foundation.

The structure has rapidly deteriorated ever since. In late July, part of the northern block collapsed for the first time. Days later on the second anniversary of the Beirut Port blast, roughly a fourth of the structure collapsed. On Sunday, the fire expanded to large sections of the silo.