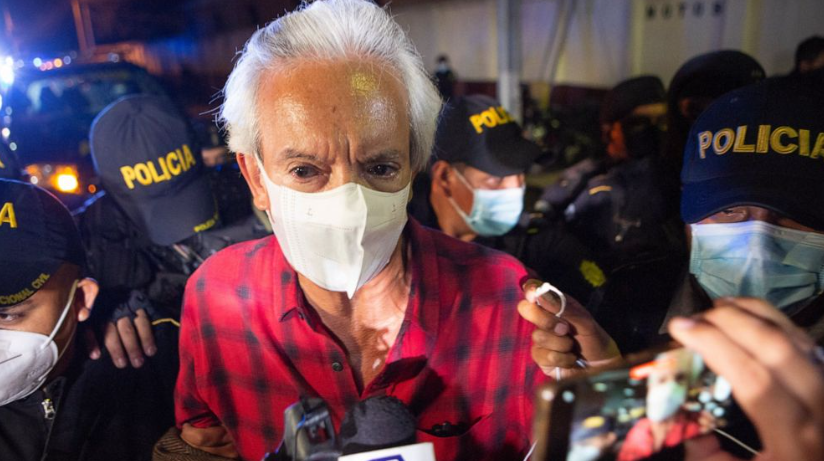 GUATEMALA CITY — A prominent Guatemalan newspaper editor who has overseen investigations into corruption has been arrested, prompting denunciations Saturday by politicians, anticorruption activists and civic groups.

Prosecution agents arrested José Ruben Zamora Marroquín at his home on Friday night, searching his home, seizing telephones and accusing him of money laundering. Zamora Marroquín is a prize-winning journalist who heads the newspaper El Periodico.

“This is an orchestrated plan, where the aim now is not to pursue those who are corrupt, but rather opponents,” said human rights activist Eleonora Muralles. “The strategy is to coopt the whole system and have judges — with serious doubts about their impartiality — put together cases and evidence against opponents.”

Journalists protested Saturday outside a courthouse where the case is being heard.

U.S. Congressman James P. McGovern, a Massachusetts Democrat, wrote that he was “deeply concerned” by the detention.

McGovern wrote in his Twitter account, “The judiciary is already decimated, is the Free Press next? Journalism is not a crime!”

Zamora Marroquín has declared a hunger strike. Speaking before a court hearing, he said, “I haven’t eaten anything nor drunk any water in 36 hours.”

The U.S. government has sharply criticized the weakening of anti-corruption efforts in Guatemala and last year cancelled the U.S. visa of Guatemalan Attorney General Consuelo Porras, who has been pursuing former prosecutors who had been conducting corruption investigations against officials..

More than former anti-corruption officials have fled the country. Now that effort appears to have extended to journalists.

Guatemala President Alejandro Giammattei has been dismissive of U.S. officials’ criticism of his attorney general and what they see as a backsliding in Guatemala on battling corruption. The country’s new special prosecutor against impunity has been placed on a U.S. list of people suspected of corruption or undermining democracy. He is accused of obstructing corruption investigations.

Giammattei’s government and prosecutors accelerated efforts begun by his predecessor to undo a U.N.-backed anti-corruption campaign that put several top officials, including former presidents, behind bars. They say those prosecutions themselves were irregular.

Moreover, a number of the Guatemalans, including two Supreme Court magistrates, were allegedly involved in a scheme to stack the Supreme and Appellate Courts with corrupt judges, according to the State Department report.