Argentina: Markets cheer new minister, but for how long? 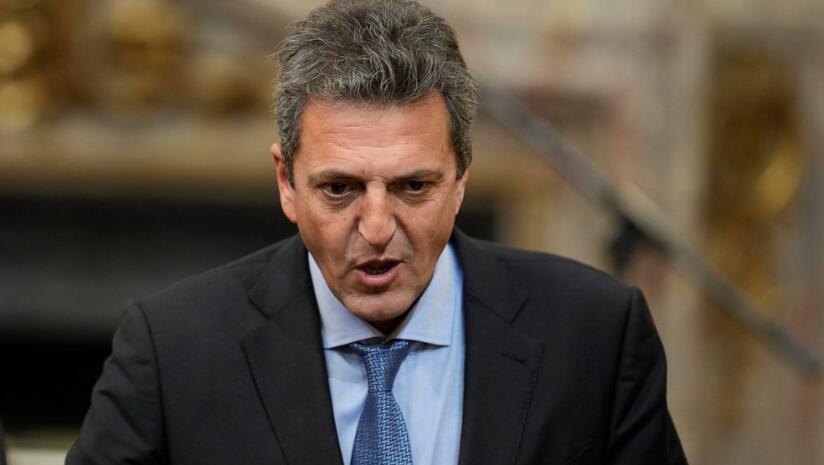 Financial markets are celebrating the arrival of Sergio Massa as Argentina’s third economy minister in less than a month, but analysts caution that more details are needed about his plans to get the South American country out of itsdire economic straits

BUENOS AIRES — The markets are cheering the arrival of Sergio Massa as Argentina’s third economy minister in less than a month, but analysts caution that more details are needed about his plans to get the South American country out of its dire economic straits.

The local currency, the peso, strengthened sharply in the financial market on Friday while government bonds saw gains a day after President Alberto Fernández’s government unveiled the appointment of Massa as an economic “super minister” that combines the current Economy, Productive Development and Agriculture ministries.

The increases registered on Friday continued a trend that started earlier this week amid rumors that Massa, the head of Congress’ lower house, the Chamber of Deputies, would be joining the administration.

“The market reaction reflects relief that someone with political skills and a strong constituency in the party has taken this key role,” said Benjamin Gedan, acting director of the Latin America program at the Washington-based Wilson Center. “He’s someone who can’t easily be dismissed, and the idea is that there will be some consistency in policy.”

Massa’s appointment came a little more than three weeks after left-leaning Silvina Batakis was named to replace the more moderate Martín Guzmán, who abruptly quit amid complaints that he did not have the full support of the governing coalition that has been split among factions loyal to the president on the one hand and Vice President Cristina Fernández de Kirchner, a former president who continues to hold a strong base of support.

The naming of Batakis was followed by a sharp depreciation of the peso amid stringent capital controls, reflecting uncertainty over whether she had the necessary authority to impose the types of reforms needed to turn around an economy that is suffering from one of the world’s highest inflation rates that is running at more than 60% annually.

“Argentina has an urgent need to restore confidence in the economy and the merry-go-round of finance ministers has the opposite effect,” Gedan said.

“What we’ve lived through as a country and society over the last few months, and in particular the last few weeks, forces us to have better coordination,” Fernández wrote on Twitter.

Massa, a former mayor who has long had presidential ambitions and enjoys good relations with the country’s business elite, has his own political base of support so is seen as someone who should presumably be able to impose his own agenda.

Massa told journalists Friday that he would name his team Monday and unveil new economic measures Wednesday. He still has to formally resign his seat in Congress before he can officially take on the ministerial role.

Despite the lack of concrete steps, market analysts are feeling confident they know which way Massa will go, considering his team has been talking to key players all week.

“The measures they’ve been discussing are pretty reasonable,” Spotorno said.

For now though, “the optimism seems slightly overblown,” warned Gedan. “It’s true that Martín Guzmán had been living outside country and didn’t necessarily have the ability to navigate the snake pit of this coalition, but the fundamental problems are both hard to solve and politically treacherous.”

One of the main questions for the country involves the future of the country’s recent deal with the International Monetary Fund to restructure some $44 billion in debt.

Cristina Fernández and her left-leaning allies in the coalition have publicly opposed the agreement, claiming it demands a level of austerity that will hurt workers and the poor while also hampering growth.

Batakis was replaced on the same day as she returned from a whirlwind tour of Washington, where she met with investors as well as officials at the IMF, the World Bank and U.S. treasury.

Even though the market seems to be welcoming Massa with open arms, it isn’t clear Argentines as a whole feel the same way.

“What the market needs and what public opinion needs are two very different things,” said Jorge Giacobbe, a political analyst who runs local pollster Giacobbe & Associates. “They’re both angry, yes, but Massa arrives in this new role having only 9% of positive image and 70% negative.”

When asked to describe Massa in one word, most choose the word “pancake,” Giacobbe said, a word that is colloquially used to describe someone who changes opinions frequently.

The low approval rating means Massa “is a man who has nothing to lose,” Giacobbe added.

Massa was Cabinet chief for almost one year during the first term of Cristina Fernández’s 2007-2015 presidency. He then went on to become highly critical of his former boss as he pursued his own presidential ambitions only to later join the coalition that ended up electing Alberto Fernández, another former ally of Cristina Fernández who later became a critic.

Handing so much power over to someone who has shown a willingness to shift alliances quickly reflects the administration’s desperation, some argue.

“This is the last bullet for the government,” Spotorno said. “If Massa leaves, who’s left? There’s no one.”