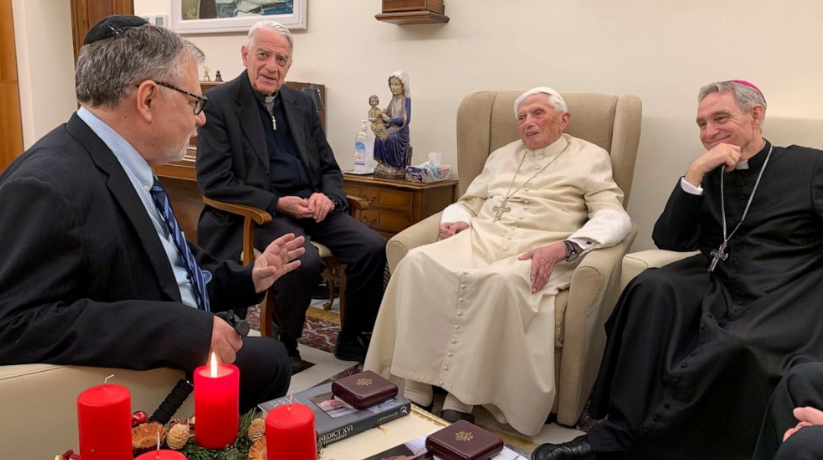 ROME — Pope Emeritus Benedict XVI was in stable condition Friday after suffering a decline in his health and participated in a private Mass in his room, the Vatican said, as the faithful in Rome honored “this last stretch of his pilgrimage.”

The Vatican provided a new medical bulletin Friday afternoon saying Benedict had been able to rest well for a second night.

“He also participated in the celebration of Holy Mass in his room yesterday afternoon,” Vatican spokesman Matteo Bruni said in a statement. “At present his condition is stationary.”

On Wednesday, Pope Francis revealed that his 95-year-old predecessor was “very ill” and he went to see him in his home in the Vatican Gardens. Francis called for prayers for Benedict, resulting in an outpouring of messages of solidarity from rank-and-file Catholics and cardinals alike.

In 2013, Benedict became the first pope in 600 years to resign, saying he no longer had the strength of body or mind to lead the then 1.2-billion-member Catholic Church. His resignation paved the way for Francis’ election.

Benedict, who for decades as Cardinal Joseph Ratzinger served the Vatican as its doctrinal guardian, chose to live out his retirement in seclusion in a converted monastery on Vatican City grounds. The German-born churchman was being tended to by a team of doctors and his longtime papal family: his secretary, Monsignor Georg Gaenswein, and a few consecrated women who help run the household.

On Friday evening, the cardinal vicar of Rome, Cardinal Angelo De Donatis, celebrated a special Mass for Benedict in St. John in Lateran Basilica. The monumental basilica was Benedict’s cathedral in his capacity as bishop of Rome when serving as pontiff.

“As priest, theologian, bishop, pope, he expressed, at the same time, the strength and the sweetness of the faith, the essentialness and the simplicity of he who knows that, when you dream with God, dreams become reality,’” De Donatis said in his homily.

Referring to Benedict’s nearly 10 years in retirement from the papacy, De Donatis said that the pope emeritus “even in old age, and in illness, continues to sustain humanity totally offering oneself.”

The pope emeritus was “in profound communion with Pope Francis,” the cardinal said.

Some critics of Francis or of his predecessor have sought to depict the relationship between the retired and reigning pontiffs as a kind of rivalry, but De Donatis’ words seemed aimed at dispelling such a perception.

The homily’s final words resounded almost like a funeral ode.

“When He wants, God will approach this brother of ours in the slumber of death and will say to him, ‘Joseph, get up, Joseph, rise.’

“And it will be Christ and his mother to take him with them and lead him into paradise, where the dream of a life will because the reality of eternity,” the cardinal concluded.

During the Mass, one of the faithful read aloud a prayer asking God to “support and console him with his presence in this last stretch of his pilgrimage.”

Benedict has indicated that when he dies, he would like to be buried in the crypt in the grotto underneath St. Peter’s Basilica once occupied by the tomb of St. John Paul II, which was moved upstairs into the main basilica in recent years.

At the end of Mass, De Donatis said the faithful were entrusting “our Pope Emeritus Benedict XVI to the maternal care” of Jesus’ mother, “because she has promised to be near to her children in the moment of trial.”