US shift on Venezuelan migrants fuels anxiety in Mexico 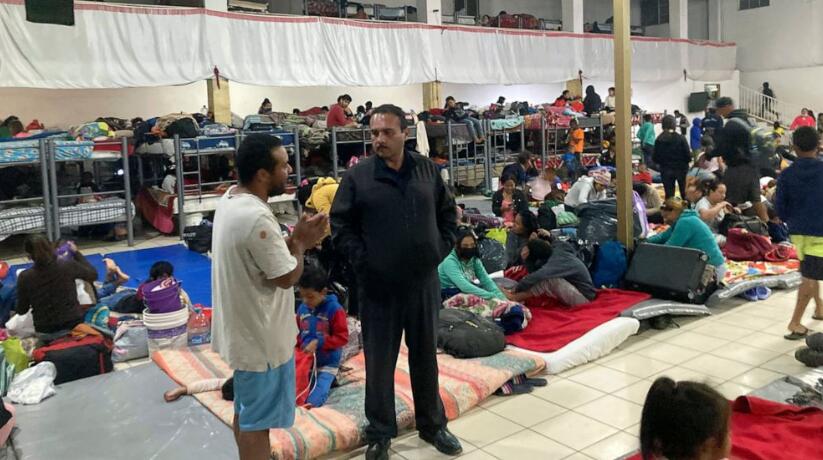 TIJUANA, Mexico — Jose Maria Garcia Lara got a call asking if his shelter had room for a dozen Venezuelan migrants who were among the first expelled to Mexico under an expanded U.S. policy that denies rights to seek asylum.

“We can’t take anyone, no one will fit,” he answered, standing amid rows of tents in what looks like a small warehouse. He had 260 migrants on the floor, about 80 over capacity and the most since opening the shelter in 2012.

The U.S. agreed to let up to 24,000 Venezuelans apply online to fly directly to the U.S. for temporary stays but said it will also start returning to Mexico any who cross illegally — a number that reached 33,000 in September alone.

The U.S. expelled Venezuelans to Tijuana and four other Mexican border cities since Wednesday, said Jeremy MacGillivray, deputy director of the United Nations’ International Organization for Migration in Mexico. The others are Nogales, Ciudad Juarez, Piedras Negras and Matamoros.

Venezuelans have suddenly become the second-largest nationality at the U.S. border after Mexicans, a tough challenge for President Joe Biden. Nearly four out of five who were stopped by U.S. authorities in August entered in or near Eagle Pass, Texas, across from Piedras Negras, a Mexican city of about 150,000 people with scarce shelter space.

“We are on the verge of collapse,” said Edgar Rodriguez Izquierdo, a lawyer at Casa del Migrante in Piedras Negras, which feeds 500 people daily and is converting a school to a shelter for 150 people.

Tijuana, where Garcia Lara runs the Juventud 2000 shelter, is the largest city on Mexico’s border and likely has the most space. The city says 26 shelters, which are running near or at capacity, can accommodate about 4,500 migrants combined.

Tijuana’s largest shelter, Embajadores de Jesus, is hosting 1,400 migrants on bunk beds and floor mats, while a group affiliated with University of California, San Diego, is building a towering annex for thousands more.

Embajadores de Jesus is growing at a blistering pace at the bottom of a canyon where roosters roam freely and shanties made of plywood and aluminum sheets line dirt roads and cracked pavement that easily flood when it rains. A cinderblock building with a kitchen and dining area is nearing completion, while migrants shovel dirt for a soccer field.

Gustavo Banda, like other shelter directors in Tijuana, doesn’t know what to expect from the U.S. shift on Venezuela, reflecting an air of uncertainty along the Mexican border. Tijuana was blindsided by a surge in Haitian arrivals in 2016, a giant caravan from Central America in 2018 and the implementation in 2019 of a now-defunct policy to make asylum-seekers wait in Mexico for hearings in U.S. immigration court.

“Nobody really knows what’s going to happen until they start sending people back,” Banda said Thursday as families with young children prepared for sleep.

Mexico’s Foreign Affairs Ministry said it would temporarily admit “some” Venezuelans who are expelled from the U.S. under a public health order known as Title 42, without indicating a numerical cap. The U.S. has expelled migrants more than 2.3 million times since Title 42 took effect in March 2020, denying them a chance at asylum on grounds of preventing the spread of COVID-19.

A Mexican official said Mexico’s capacity to take back Venezuelans hinges on shelter space and success of the U.S. offer of temporary stays for up to 24,000 Venezuelans. The official was not authorized to discuss the matter publicly and spoke condition of anonymity.

Until now, Mexico has only accepted returns from Guatemala, Honduras or El Salvador, in addition to Mexico. As a result, Mexican shelters have been filled with migrants from those countries, along with Haitians.

Venezuelans, like those of other nationalities including Cuba and Nicaragua, have generally been released in the United States to pursue immigration cases. Strained diplomatic relations have made it nearly impossible for the Biden administration to return them to Venezuela.

Blas Nuñez-Neto, a top U.S. Homeland Security Department official, didn’t answer directly when asked by reporters Thursday how many Venezuelans are likely to be expelled to Mexico, saying only that he expects fewer will try to cross the border.

Homeland Security said Venezuelans who cross the border by land after Wednesday’s announcement will be expelled. Edward Pimentel was among the migrants who said they were returned despite being in U.S. custody before the policy was announced.

“The truth is that our dream is the American dream, we wanted to go to the United States,” Pimentel said outside a Tijuana convenience store.

In Matamoros, hundreds of Venezuelans protested, saying they entered the U.S. before the policy took effect. Gregori Josue Segovia, 22, said he was processed by U.S. authorities Monday in El Paso, Texas, and was moved around before ending up in Matamoros.

“We were on three buses and they told us nothing, but we thought everything was normal when we realized were on the (international) bridge” to be returned to Mexico, he said Friday.

About 7 million Venezuelans have fled their homeland in recent years but had largely avoided the U.S. The U.S. offers a relatively strong economy and slim chances of being returned to Venezuela, suddenly making it more attractive.

For Venezuelans in Mexico, their best hope may be a U.S. exemption from Title 42 for people deemed particularly vulnerable.

In Tijuana, it appears more migrants are getting such exemptions from the U.S. Homeland Security Department. The U.S. has been allowing about 150 migrants a day at a border crossing to San Diego, said Enrique Lucero, Tijuana’s director of migration affairs.

Many are chosen by advocacy groups from Tijuana shelters — causing some migrants to move there not for a place to stay but for a better shot at being selected to enter the U.S., said Lucero.

Embajadores de Jesus keeps a notebook with names of migrants hoping to qualify for a Title 42 exemption. Banda, a pastor and shelter director, said they wait about three months to enter the U.S.

Venezuelans who were in Mexico before Wednesday may also apply for one of the 24,000 temporary slots that the U.S. is making available, similar to an effort launched in April for up to 100,000 Ukrainians fleeing Russia’s invasion. They must have a financial sponsor in the U.S. and pay for their flights.

Mexico welcomed statements from U.S. officials that the temporarily relief offered to Ukrainians and now Venezuelans may expand to other nationalities.

Orlando Sanchez slept in a bus station in Mexico City with hundreds of other Venezuelans waiting to receive money from family. He said he didn’t have enough for a flight.

Naile Luna, a Venezuelan who was on her way to Ciudad Juarez, across the border from El Paso, said she hoped being eight months pregnant would spare her being expelled to Mexico. She said she knew nothing about the new policy.