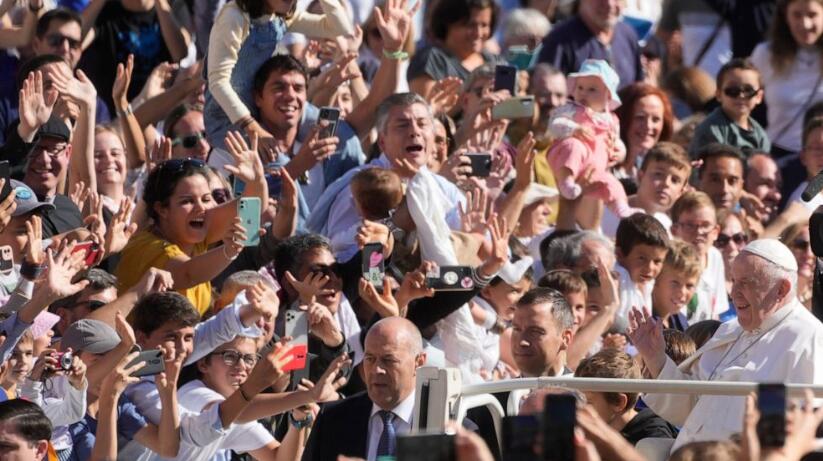 VATICAN CITY — Pope Francis exhorted members of a major Catholic lay group Saturday to keep up their enthusiasm, a year after Vatican reforms put checks on the leadership of such organizations.

In St. Peter’s Square, Francis addressed thousands of members of Communion and Liberation, a lay organization present in some 90 countries. The group is particularly active in Italy and seeks political influence.

Last year, the Vatican moved to better regulate religious movements for the faithful who are not clergy by mandating term limits for their leaders. The action forced out a Spanish priest, the Rev. Julian Carron, who had headed Communion and Liberation since 2005.

A few months ago, the head of the Vatican’s office on laity complained that Carron was still exercising influence against the Vatican’s reforms.

At Saturday’s audience, Communion and Liberation members cheered the pope, who recalled the 100th anniversary of the birth of their organization’s late founder, the Rev. Luigi Guissani.

In his speech, Francis thanked Carron “for his service in guiding the movement” in the years following Guissani’s death. Still, said the pontiff, there have been “serious problems, divisions and certainly an impoverishment in the presence of an ecclesial movement so important as Communion and Liberation, for which the church, and I myself, hope (to have) more, much more.”

With the 2021 reform, the Vatican’s laity office cracked down on the largely unregulated world of international associations of the faithful following the reporting of some cases of abuses of authority and bad governance.

“Without authority, one risks going off the road, going in a wrong direction,” Francis told the Communion and Liberation members, Still, “without charisma, the path risks becoming boring, no longer attractive for people of that particular historic moment.”

The pope said it’s up to the Catholic Church to indicate “with wisdom and prudence on which path the movements must walk, to remain faithful to themselves and to the mission God entrusted to them.”

“Don’t let your brotherhood be wounded by divisions and confrontations,” the pontiff said, blaming such conflicts on the devil. “Even in difficult moments, there can be moments of grace, and they can be moments of rebirth.”