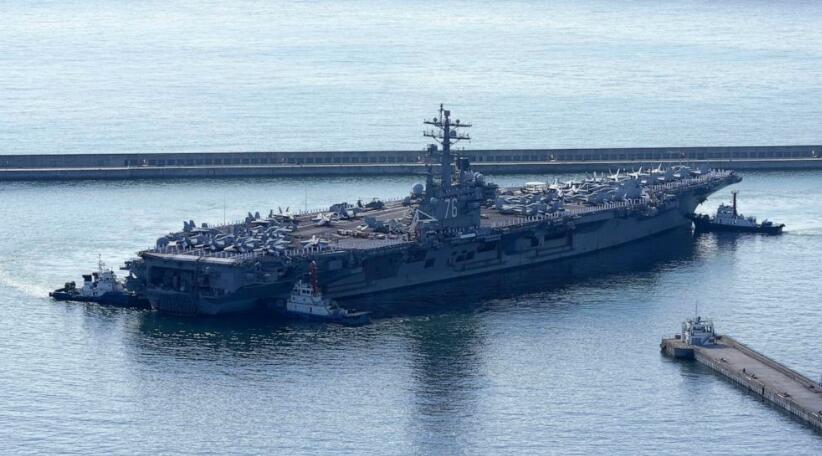 South Korea says North Korea has fired two ballistic missile toward its eastern waters, the latest in a barrage of weapons tests in recent days

SEOUL, South Korea — North Korea fired two short-range ballistic missiles toward its eastern waters on Sunday, the latest of a recent barrage of weapons tests, a day after it warned the redeployment of a U.S. aircraft carrier near the Korean Peninsula was inflaming regional tensions.

South Korea’s Joint Chiefs of Staff said in a statement that it detected two missile launches Sunday between 1:48 a.m. and 1:58 a.m. from the North’s eastern coastal city of Munchon. It added that South Korea’s military has boosted its surveillance posture and maintains a readiness in close coordination with the United States.

Ino said the weapons could be submarine-launched ballistic missiles. “We are continuing to analyze details of the missiles, including a possibility that they might have been launched from the sea,” Ino said.

North Korea’s pursuit of an ability to fire missiles from a submarine would constitute an alarming development for its rivals because it’s harder to detect such launches in advance. North Korea was believed to have last tested a missile launch from a submarine in May.

The South Korean and Japanese militaries assessed that the missiles flew about 350 kilometers (217 miles) and reached maximum altitudes of 90 to 100 kilometers (56 to 60 miles) before falling into the waters between the Korean Peninsula and Japan.

Japanese Prime Minister Fumio Kishida separately instructed officials to gather and analyze all information they could and expedite any updates about the tests to the public. His office said it also was seeking to ensure the safety of all aircraft and ships in waters around Japan while preparing for any contingencies.

Seoul warned that Pyongyang’s consecutive provocations will deepen its international isolation and increase the “instability of the regime” by worsening its economy and people’s livelihoods.

The U.S. Indo-Pacific Command said in a statement that the launches didn’t pose any immediate threat to U.S. personnel or territory, or to its allies. But it said the launches highlight “the destabilizing impact” of North Korea’s unlawful weapons of mass destruction and ballistic missile programs. It said U.S. commitments to the defense of South Korea and Japan remain “ironclad.”

The launch, the North’s seventh round of weapons tests in two weeks, came hours after the United States and South Korea wrapped up two days of naval drills off the Korean Peninsula’s east coast.

The drills involved the nuclear-powered aircraft carrier USS Ronald Reagan and its battle group, which returned to the area after North Korea fired a powerful missile over Japan last week to protest the carrier group’s previous training with South Korea.

On Saturday, North Korea’s Defense Ministry warned that the Reagan’s redeployment was causing a “considerably huge negative splash” in regional security. The ministry called its recent missile tests a “righteous reaction” to intimidating military drills between South Korea and the United States.

North Korea regards U.S.-South Korean military exercises as an invasion rehearsal and is especially sensitive if such drills involve U.S. strategic assets such as an aircraft carrier. North Korea has argued it was forced to pursue a nuclear weapons program to cope with U.S. nuclear threats. U.S. and South Korean officials have repeatedly said they have no intentions of attacking the North.

North Korea has launched more than 40 ballistic and cruise missiles in over 20 different events this year, exploiting a division in the U.N. Security Council deepened over Russia’s war on Ukraine as a window to speed up arms development.

The record number of tests included last week’s launch of a nuclear-capable missile that flew over Japan for the first time in five years. It was estimated to have traveled about 4,500-4,600 kilometers (2,800-2,860 miles), a distance sufficient to reach the U.S. Pacific territory of Guam and beyond.

South Korean officials say Pyongyang may up the ante soon by conducting an intercontinental ballistic missile or a nuclear test explosion, following a traditional pattern of manufacturing diplomatic crises with weapons tests and threats before offering negotiations aimed at extracting concessions. There are also concerns about provocations along the Koreas’ land and sea borders.

Sunday’s launches came on the eve of the 77th anniversary of the foundation of the North Korean ruling Workers’ Party.

North Korea’s testing spree indicates its leader, Kim Jong Un, has no intention of resuming diplomacy with the U.S. and wants to focus on expanding his weapons arsenal. But some experts say Kim would eventually aim to use his advanced nuclear program to wrest greater outside concessions, such as the recognition of North Korea as a legitimate nuclear state, which Kim thinks is essential in getting crippling U.N. sanctions lifted.