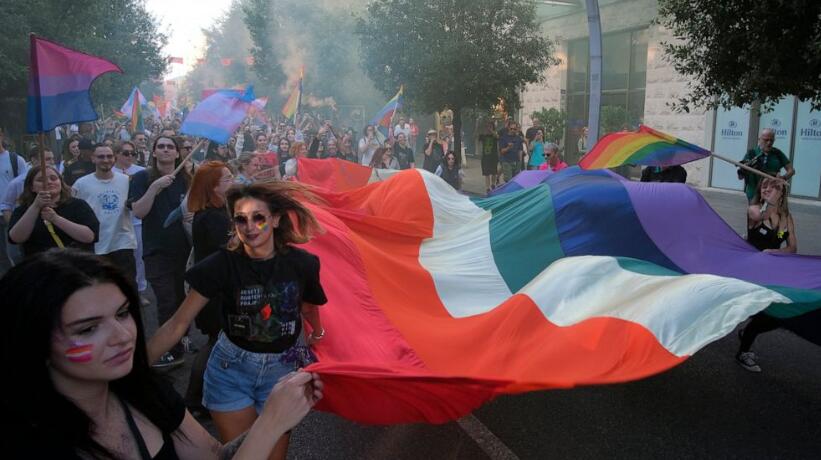 Montenegro’s 10th pride event was dubbed “No more buts,” reflecting demands that more be done to stem hate speech and harassment of LGBTQ community despite huge steps that have been made in the past years.

“We gathered here for the 10th time to show we are human, (that we are) live beings made of flesh and blood, wishes and dreams, but rejected and ignored, discriminated and trampled upon because of love,” said activist Stasa Bastrica.

Montenegro is a highly conservative, male-dominated society and initial pride marches here were marred with violence. As the country seeks European Union membership, authorities have backed pride events in recent years and approved same-sex partnerships in 2020.

On the eve of the march, influential Serbian Orthodox Church in Montenegro held a prayer protest Friday against the pride march, saying it jeopardizes traditional values and family. Hundreds attended the church-led protest, including some pro-Serb officials.

The Serbian church, which also holds significant following in Montenegro, held a similar gathering in Serbia ahead of a pan-European pride event there last month.

After splitting from Serbia in 2006, Montenegrins have remained divided among those supporting pro-Western policies and those favoring closer ties with fellow-Slavic countries Serbia and Russia. Pro-Western leaders in Montenegro have accused Serbia and its church of seeking to maintain influence and turn Montenegro away from the West.

Bastrica said the church and other conservative forces in Montenegro have fueled hatred against LGBTQ community by “making us the main enemy of the majority and … insanely blaming us for the disappearance of marriage, family (values) and sometimes natural disasters, and all in the name of God.”

Another activist, Danijel Kalezic said Friday’s church-led gathering illustrated divisions in Montenegro. He insisted that the LGBTQ community will not give up their demands.

“We don’t want them (officials) to come here and take photos with us,” said Kalezic. “We want results. No more buts!”

The Serbian church in Montenegro also led weeks of protest ahead of the 2020 election that toppled long-ruling pro-Western authorities and paved the way for the formation of a pro-Serb government. A former Slavic ally of Russia in the Balkans, Montenegro in 2017 defied Moscow to join NATO.