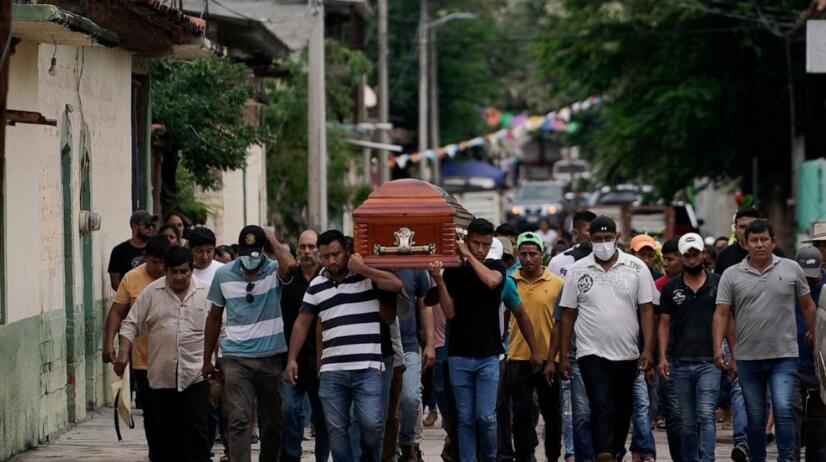 A drug gang has shot to death 20 people, including a mayor and his father in the mountains of southern Mexico

SAN MIGUEL TOTOLAPAN, Mexico — A drug gang shot to death 20 people, including a mayor and his father, in the mountains of the southern Mexico state of Guerrero, officials said Thursday.

Residents began burying the victims even as a video posted on social media showed men who identified themselves as the Tequileros gang claiming responsibility for the mass shooting.

The Guerrero state security council said gunmen burst into the town hall in the village of San Miguel Totolapan Wednesday and opened fire on a meeting the mayor was holding with other officials.

Among the dead were Mayor Conrado Mendoza and his father, Juan Mendoza Acosta, a former mayor of the town. Most of the other victims were believed to be local officials.

The walls of the town hall, which were surrounded by children’s fair rides at the time, were left riddled with bullets. However, residents said the attack that killed the mayor occurred a few blocks away.

Totolapan is geographically large but sparsely populated mountainous township in a region known as Tierra Caliente, one of Mexico’s most conflict-ridden areas.

There were so many victims that a backhoe was brought into the town’s cemetery to scoop out graves as residents began burying their dead Thursday. By midday, two bodies had already been buried and 10 more empty pits stood waiting.

A procession of about 100 residents singing hymns walked solemnly behind a truck carrying the coffin of one man killed in the shooting. Once they neared the cemetery, several men hoisted the coffin out of the truck and walked with it the waiting grave. Dozens of soldiers were posted at the entrance to the town.

Ricardo Mejia, Mexico’s assistant secretary of public safety, said the Tequileros are fighting the Familia Michoacana gang in the region and that the authenticity of the video was being verified.

“This act occurred in the context of a dispute between criminal gangs,” Mejia said. “A group known as the Tequileros dominated the region for some time; it was a group that mainly smuggled and distributed opium, but also engaged in kidnapping, extortion and several killings in the region.”

Totolapan was controlled for years by drug gang boss Raybel Jacobo de Almonte, known by his nickname as “El Tequilero” (“The Tequila Drinker”).

In his only known public appearance, de Almonte was captured on video drinking with the elder Mendoza, who was then the town’s mayor-elect, in 2015. It was not clear if the elder Mendoza was there of his own free will, or had been forced to attend the meeting.

In that video, de Almonte appeared so drunk he mumbled inaudibly and had to be held up in a sitting position by one of his henchmen.

In 2016, Totolapan locals got so fed up with abductions by the Tequileros that they kidnapped the gang leader’s mother to leverage the release of others.

While the Tequileros long depended on trafficking opium paste from local poppy growers, the growing use of the synthetic opioid fentanyl had reduced the demand for opium paste and lowered the level of violence in Guerrero.

Also Wednesday, in the neighboring state of Morelos, a state lawmaker was shot to death in the city of Cuernavaca, south of Mexico City.

Two armed men traveling on a motorcycle fatally shot state Deputy Gabriela Marín as she exited a vehicle outside a pharmacy. A person with Marín was reportedly wounded in the attack.

“Based on the information we have, we cannot rule out a motive related to politics,” Mejia said of that killing. “The deceased, Gabriela Marín, had just taken office as a legislator in July, after another member of the legislature died, and there were several legal disputes concerning the seat.”

The killing of Mendoza brought to 18 the number of mayors slain during the administration of President Andrés Manuel López Obrador, and the number of state lawmakers to eight, according to data from Etellekt Consultores.

While attacks on public officials are not uncommon in Mexico, these come at a time when the López Obrador’s security strategy is being sharply debated. The president has placed tremendous responsibility in the armed forces rather than civilian police for reining in Mexico’s persistently high levels of violence. He pledged to continue, saying “we have to go on doing the same things, because it has brought results.”

“These are (criminal) organizations that have been there for a long time, that didn’t spring up in this administration,” López Obrador said. He also blamed local people in the Tierra Caliente region for supporting the gangs — and sometimes even electing them to office.

“There are still communities that protect these groups, and even vote them into office as authorities,” the president said.