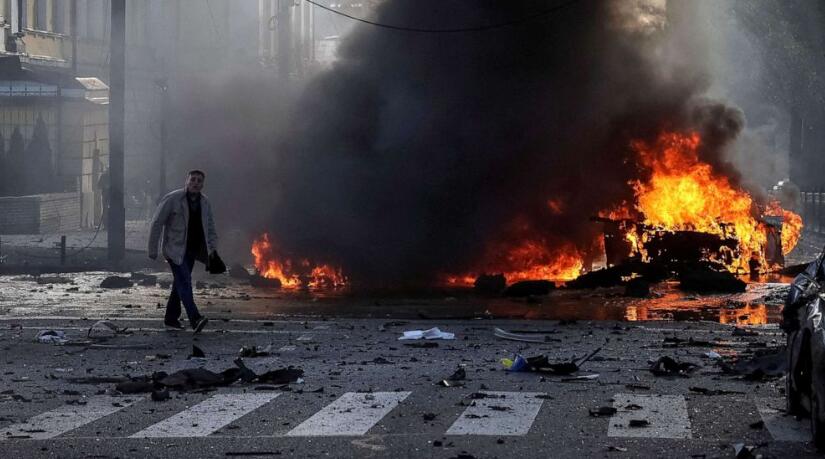 At least 19 were killed and dozens injured in Monday’s attack, officials said.

Russia’s missile strikes across Ukraine on Monday were a direct retaliation for the attack damaging the key bridge connecting Crimea with Russia, Russian President Vladimir Putin said this week.

The bombardment was the largest against Ukrainian cities in months and focused heavily on civilian targets, killing at least 19 and injuring dozens more, Ukrainian officials said. It was also the first time the very center of Kyiv had been directly hit.

But while the barrage was intended to terrorize, independent analysts said it underlined not Russia’s strength but growing weakness, illustrating its inability to shift the military situation in its favor. They called it a desperate attempt by Russian President Vladimir Putin to respond to critics at home but said the strikes would have no effect in reversing Russia’s battlefield defeats.

“This is not, therefore, a new war-winning strategy but a … tantrum,” Lawrence Freedman, a professor of War Studies at Kings College London, wrote in a post his Substack blog of Monday’s strikes.

The Crimean bridge that was partially collapsed by a blast over the weekend was a target with major symbolic and military significance for Russia. The bridge was an expensive physical symbol of Putin’s annexation of Crimea and a key supply line for Russian forces already under intense pressure in southern Ukraine.

The attack on the bridge was a personal humiliation for Putin that underscored how badly the war is going for Russia. Russian nationalists were demanding a commensurate response, experts said.

Russia’s strikes on Monday were unable to hit anything comparable, instead resorting to bombing civilian targets without any military significance, including a university and a children’s playground in Kyiv, local officials said.

“The occupiers are not capable of opposing us on the battlefield already, that is why they resort to this terror,” Ukraine President Volodymyr Zelenskyy said in a social media post on Monday.

In the capital, for example, a Russian missile targeted a pedestrian bridge that crosses through a park and that’s only used for sightseeing. The missile missed the bridge, leaving it intact, but it did hit the surrounding park. It’s unclear if that strike resulted in any injuries.

Russia also targeted several power stations around the country that Ukrainian and Western officials have said are part of a strategy of destroying heating infrastructure as winter approaches.

The strikes are designed to spread fear, but will have no impact on Ukraine’s ability to keep advancing in the northeast and south where Russia is on the defensive, several military analysts said. Russia is also running out of the long-range missiles it used in Monday’s strike, meaning it will be unable to maintain such intensity even short-term, analysts said.

Pavel Luzhin, a military expert and political scientist, told the Russian independent news site The Insider that after Monday’s strikes, Russia already had insufficient advanced missiles to repeat such a large-scale attack.

“The 83 missiles that Russia used today, it had been hoarding for several months,” Luzhin, who writes for Riddle Russia, told The Insider. Russia produces no more than 200 advanced cruise missiles a year, he said, and upping production or buying them from other countries was impossible.

Luzhin said Russia still had larger quantities of older, less advanced missiles and now Iranian drones, but these were not enough to have a significant military impact.

“Enough for terror, but not for anything more,” he said.

White House spokesman John Kirby said in an interview on “Good Morning America” on Tuesday that Russia’s bombing campaign across Ukraine didn’t appear to be enough to turn the military tide in Russia’s favor.

“It doesn’t appear like they’re going to do that,” Kirby said. “I mean, we don’t know what the next steps here are for Mr. Putin. But you can see just from the–just from the reaction of the Ukrainian people over the course of the weekend, they’re not backing down. They’re not slowing down. They’re gonna continue to conduct their counteroffensives. They are still active on the battlefield.”

Greg Yudin, a professor of political philosophy at the Moscow School of Social and Economic Sciences, told ABC News the Russian hardliners were “the target audience” for Monday’s strikes.

He said Putin was now fully aligned with the hardliners and that he would escalate further despite his military’s growing weakness.

“He doesn’t care about reality. He will push until the end. He will escalate further and further, hoping that perhaps the final escalation will make the opponent surrender,” Yudin said.

He said, in Putin’s view, the real opponent he must force to surrender was the West.

“The hardliners have been demanding attacks on Ukrainian infrastructure for some time and they now have got what they wanted. But they will inevitably be disappointed with the results. The electricity will be turned back on, the rubble cleared, and Ukraine’s armies will continue to press forward,” Freedman wrote in a post on his Substack.

Russia has been bombing Ukrainian infrastructure since the start of the war, hitting Ukrainian cities most days, but the number of its strikes has fallen dramatically since the summer, which is a sign it has to ration its limited missile stockpile, most military experts say.

Short on missiles and pushed back from Ukrainian cities, Russia is often turning to anti-aircraft and anti-ship missiles to strike ground targets in order to preserve its more valuable cruise missiles, experts said. Ukraine is also increasingly effective at shooting down Russian missiles.

One of Britain’s top spy chiefs on Tuesday also said Russia was increasingly short on ammunition and supplies of all types.

“We know — and Russian commanders on the ground know — that their supplies and munitions are running out,” Sir Jeremy Fleming, the head of Britain’s GCHQ intelligence will say in a speech he is expected to give Tuesday, the BBC and other media outlets reported. “Russia’s forces are exhausted. The use of prisoners to reinforce, and now the mobilization of tens of thousands of inexperienced conscripts, speaks of a desperate situation.”

As Ukraine has routed Russian forces in parts of the country in recent weeks, hardline nationalists in Russia have been calling for Putin to adopt a total war approach that would destroy civilian infrastructure and flatten Ukrainian cities. On Monday some of those critics hailed the strikes.

“We must hope that this is not a one-time act of revenge but a new system of waging war,” Alexander Kots, a prominent military reporter for the pro-Kremlin Komsomolskaya Pravda newspaper, wrote on the social media platform Telegram. “Across the entire Ukrainian government. Until they lose the ability to function.”

The Kremlin last week appointed a new overall commander for its Ukrainian operations, Gen. Sergey Surovikin, known for leading a brutal indiscriminate bombing campaign in Syria. Monday’s strikes may suggest the Kremlin may be shifting to a similar strategy of intensifying attacks on civilians in the hope of counterbalancing its military’s failures while also placating its most aggressive supporters, experts said.

In a short speech on Monday, Putin said the strikes were in response to the Crimean bridge explosion and warned Ukraine more would come if it repeated similar attacks. “No one should have any doubts about that,” Putin said.

But Ukrainian officials said the threats would not intimidate them, noting Russia has barraged the country since February and instead calling for western countries to provide more air defenses.

Kyiv has pleaded for such defenses for months, and Zelenskyy did so again Tuesday at the G7 meeting.

“I thank you for all the help already provided. It is big, it is significant,” Zelenskyy said Tuesday. “But the Russian leader, who is now in the final stage of his reign, still has room for further escalation. This possibility of his is a threat to all of us.”

Zelenskyy told the G7 that air defense systems are critical for peace to be achieved in his country.

“We have a formula for peace. And now, reacting to Russian terror, sham referenda and the attempt to annex our territory, we can apply the peace formula so that the terrorist state stands no chance,” he said.

“The first point is defense support. Air shield for Ukraine. This is part of the security guarantees that are an element of our peace formula,” Zelenskyy said Tuesday. “When Ukraine receives a sufficient number of modern and effective air defense systems, the key element of Russian terror – missile strikes – will cease to work.”

In a phone call on Monday with Zelenskyy, President Joe Biden pledged to continue support, including “advanced air defense systems.”

The United States announced in July it would provide two NASAMS surface-to-air defense systems, although they have not yet arrived.

Kirby wouldn’t provide any more details on what more, in terms of air defense systems, the U.S. may provide Ukraine.

“Clearly, air defense is a need, and we’re going to work with them on that going forward,” he told “GMA” on Tuesday, adding: “Clearly, after this weekend, air defense capabilities continue to be a significant need for Ukraine.”