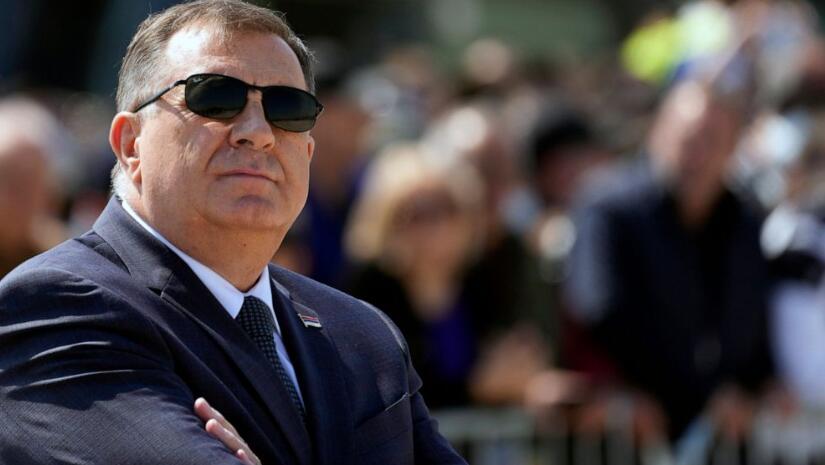 During a rare visit to Moscow by a politician from Europe, the Russian president praised his country’s “strategic partnership” with Serbia.

The visit came amid repeated warnings from the European Union that Serbia must align its foreign policies with the bloc if it really wants to become a member. Serbia is the only nation seeking EU membership that has refused to join Western sanctions against Russia over its war in Ukraine.

Dodik, a Serb member of Bosnia’s tripartite presidency, has frequently met with Putin, especially ahead of elections when he wants to show to the highly pro-Russian Bosnian Serb electorate that he has Putin’s support. Dodik last met Putin in June, months after Russia’s invasion of Ukraine in February.

Bosnia has a general election on Oct. 2 in which Dodik is running for the Bosnian Serb presidency.

“The elections are coming up and I wish you success,” Putin said according to a transcript of the conversation published by Bosnian media. “I hope that it will be so, after the results of the vote, that the position of the patriotic forces will be strengthened, which will enable us to further develop fruitful and mutually beneficial cooperation.”

Moscow has often been accused by the West of seeking to destabilize Bosnia and the rest of the Balkans through its proxies in Serbia and Bosnia. Dodik has openly advocated tearing away the Serb-controlled half of Bosnia from a Bosniak-Croat federation and joining it up with neighboring Serbia.

A U.S.-brokered peace deal in 1995 ended a war in Bosnia that left at least 100,000 people dead and millions homeless, but left the country deeply divided between its three main ethnic groups. Moscow has been exploiting the divisions by tacitly supporting Dodik’s separatist policies.

On the eve of his visit to Moscow, Dodik gave an interview to Russia’s state TASS news agency where he repeated his separatist views but also added his endorsement of Russia’s invasion of Ukraine.

“For many years the West did not react to the extermination of the Russian population in Ukraine, there were daily murders and bombings in Donbas,” Dodik claimed in the interview, referring to the separatist pro-Russian region in eastern Ukraine. “All this was clear, and Russia was forced to retaliate.”

Putin also sent a separate message to Serbia and its populist President Aleksandar Vucic on Tuesday.

“Russia and Serbia are linked by a strategic partnership,” Putin said, according to the Serbian media. “I regularly talk to President Vucic during personal meetings and telephone conversations about key issues for the further development of the cooperation.”

Although officially seeking EU membership, Serbia has during Vucic’s 10-year autocratic rule slid ever closer to Russia under Putin.

Vucic is in New York for the U.N. General Assembly session, where he says he intends to send a message that Serbia has, under international law, the same rights to fight against the independence of its separatist former province of Kosovo as Ukraine has for those regions occupied by pro-Moscow separatists.

Kosovo, where ethnic Albanians represent more than 90% of the population, declared independence from Serbia in 2008, nearly 10 years after NATO intervened to stop a bloody Serb carnage against independence-seeking Kosovo Albanians. Serbia has refused to acknowledge their independence.