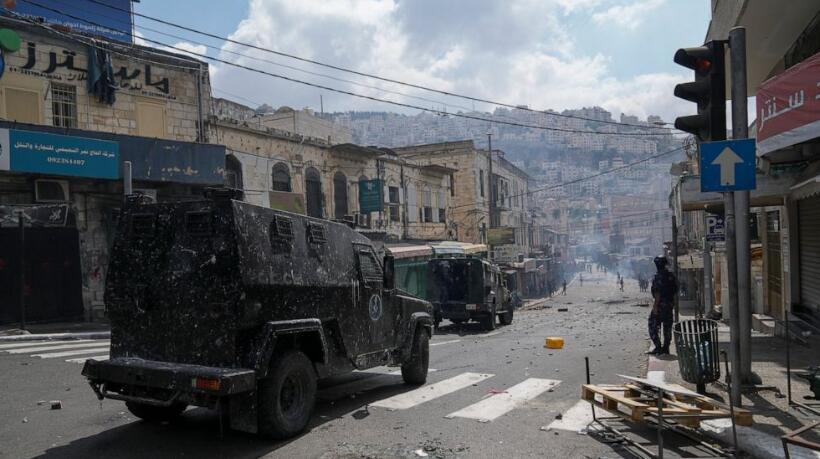 Israeli police say an 84-year-old woman has been beaten to death in central Israel, and they are searching for a young Palestinian man wanted in the killing

NABLUS, West Bank — Palestinian security forces exchanged fire with militants in the center of the West Bank’s second-largest city Tuesday as angry residents pelted an armored jeep with objects and chased it away. One man was reported dead.

In separate violence, Israeli police said late Tuesday that an 84-year-old woman was beaten to death in central Israel and that they were searching for a Palestinian suspect. Prime Minister Yair Lapid called the killing “pure evil.”

The fighting in Nablus, sparked by an arrest raid against local militants, marked a rare case of deadly internal Palestinian fighting in the occupied West Bank. It also reflected the deep unpopularity of the internationally recognized Palestinian Authority, which is widely seen as collaborating with an entrenched and unbearable system of Israeli military domination.

Amateur videos posted to social media showed local youths pelting a Palestinian military-style jeep with bricks, stones and metal bars before chasing the vehicle from the central Martyrs Square. The sound of gunfire echoed through the city, known as the West Bank’s business capital, for several hours. The violence was reminiscent of how Palestinians typically protest against Israeli troops.

By midafternoon, the Palestinian forces had withdrawn and the city remained quiet.

The northern West Bank is known as a stronghold of Palestinian militants, and the Palestinian Authority has frequently had difficulties maintaining control in the area over the years.

The authority maintains close security ties with Israel in a shared struggle against Islamic militants. This has helped fuel the perception that the PA is merely a subcontractor for Israel — interested more in its own survival than improving the lives of its people.

Israel’s military occupation of the West Bank is now in its 55th year, with no signs of ending anytime soon. The last substantial round of peace talks ended in 2009. The Palestinians seek all of the West Bank, home to some 500,000 Israeli settlers, as the heartland of a future independent state.

In recent months, the PA’s standing has been further weakened as Israel carries out nightly arrest raids.

A survey published Tuesday found that 26% of Palestinians are satisfied with the performance of President Mahmoud Abbas, while 74% are hoping for his resignation. It also projected that Hamas leader Ismail Haniyeh would defeat Abbas in an election, even in the West Bank. The survey conducted by the Palestinian Center for Policy and Survey Research questioned 1,270 people and had a margin of error of three percentage points.

Israel launched the West Bank crackdown last spring after a series of deadly attacks inside Israel, some of which were launched by militants from the area. Some 90 Palestinians have died in the arrest raids, many said by Israel to have been militants, or local youths who came out to protest the raids.

Israeli police released few details about the deadly attack in the Tel Aviv suburb of Holon. But they released a photo of a young Palestinian man from the West Bank wanted in the beating and asked the public for help in finding him. Lapid, who was at the United Nations General Assembly in New York, called the killing a “shocking attack by a despicable and cowardly terrorist.”

Israel says it is forced to act because the Palestinian security forces have failed to do so. The Palestinians say it is difficult and humiliating to cooperate with the Israelis at a time when there is no political horizon.

Earlier Tuesday, Lapid met with Jordan’s King Abdullah II. In a brief statement, Lapid’s office said he talked about “the need for calming the situation on the ground and halting terrorism ahead of the upcoming Jewish holidays.”

Abdullah, whose country borders the West Bank and has been a vocal critic of Israeli policies there, called for maintaining a “comprehensive calm” during the upcoming period. In a statement released by his office, Abdullah called for a “political horizon to achieve a just and comprehensive peace” that would establish an independent Palestinian state alongside Israel. He also called for granting the Palestinians “their just and legitimate rights.”

The United States has pushed both Israel and the Palestinians to restore quiet. But the Biden administration has failed to present a diplomatic plan, focusing instead on small measures to improve the Palestinian economy.

Palestinian officials refused to comment on Tuesday’s operation. But two Hamas militants were arrested in the raid, according to the men’s families. One of them was close to another militant who was recently killed in an Israeli raid.

Hisham Yaish, a local resident, wrote on Facebook that his 53-year-old brother Firas was killed in a gunfight. He did not accuse either side of firing the deadly bullet, saying only his brother “was killed in the tragic incidents.”

But Hamas, which is locked in a bitter rivalry with the internationally recognized Palestinian Authority, said the Palestinian security forces had killed him.

Hamas condemned the raid and accused the Palestinian Authority of collaborating with Israel.

“While the enemy continues to carry out killings, arrests, Judaization and settlements, the authority identifies with it by continuing security coordination, suppressing our people, and pursuing and arresting resistance fighters in behavior outside all our national norms,” Hamas said in a statement.

He said the cause of the death was unknown, but claimed an initial report found that security forces were not in the area where he was killed.

“Testimonies of eyewitnesses who were present in the area of the unfortunate accident confirm the authenticity of this account,” he said.