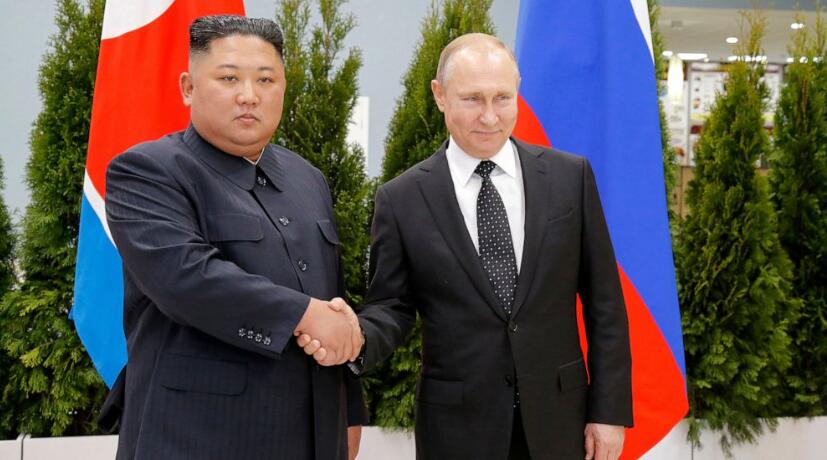 As the war in Ukraine stretches into its seventh month, North Korea is hinting at its interest in sending construction workers to help rebuild Russian-occupied territories in the country’s east

SEOUL, South Korea — As the war in Ukraine stretches into its seventh month, North Korea is hinting at its interest in sending construction workers to help rebuild Russian-occupied territories in the country’s east.

The idea is openly endorsed by senior Russian officials and diplomats, who foresee a cheap and hard-working workforce that could be thrown into the “most arduous conditions,” a term Russia’s ambassador to North Korea used in a recent interview.

North Korea’s ambassador to Moscow recently met with envoys from two Russia-backed separatist territories in the Donbas region of Ukraine and expressed optimism about cooperation in the “field of labor migration,” citing his country’s easing pandemic border controls.

The talks came after North Korea in July became the only nation aside from Russia and Syria to recognize the independence of the territories, Donetsk and Luhansk, further aligning with Russia over the conflict in Ukraine.

The employment of North Korean workers in Donbas would clearly run afoul of U.N. Security Council sanctions imposed on the North over its nuclear and missile programs and further complicate the U.S.-led international push for its nuclear disarmament.

Many experts doubt North Korea will send workers while the war remains in flux, with a steady flow of Western weapons helping Ukraine to push back against much larger Russian forces.

But they say it’s highly likely North Korea will supply labor to Donbas when the fighting eases to boost its own economy, broken by years of U.S.-led sanctions, pandemic border closures and decades of mismanagement.

The labor exports would also contribute to a longer-term North Korean strategy of strengthening cooperation with Russia and China, another ideological ally, in an emerging partnership aimed at reducing U.S. influence in Asia.

That’s a clear break from Russia’s position in December 2017, when it backed new U.N. Security Council sanctions, imposed on North Korea for testing an intercontinental ballistic missile, requiring member states to expel all North Korean workers from their territories within 24 months.

Russia now seems eager to undercut those sanctions as it faces a U.S.-led pressure campaign aimed at isolating its economy over its aggression in Ukraine, said Lim Soo-ho, a senior analyst at the Institute for National Security Strategy, a think tank run by South Korea’s spy agency.

“For Russia, the idea of employing North Korean workers for postwar rebuilding has real merit,” Lim said. “Large numbers of North Korean construction workers came to Russia in previous years, and demand for their labor was strong because they were cheap and known for quality work.”

Before the 2017 sanctions, labor exports were a rare legitimate source of foreign currency for North Korea, bringing hundreds of millions of dollars a year to the government.

The U.S. State Department earlier estimated that about 100,000 North Koreans were working overseas in government-arranged jobs, primarily in Russia and China, but also in Africa, the Middle East, Europe and South Asia.

Civilian experts say the workers earned $200 million to $500 million a year for North Korea’s government while pocketing only a fraction of their salaries, often toiling for more than 12 hours a day under constant surveillance by their country’s security agents.

While Russia sent home some North Korean workers before the U.N. deadline in December 2019, an uncertain number remained, continuing to work or becoming stuck after the North sealed its borders to fend off COVID-19.

North Korea could easily mobilize possibly several hundreds or even thousands of workers to Donbas if it decides to use the laborers who remained in Russia, said Kang Dong Wan, a North Korea expert at South Korea’s Dong-A University.

It’s not yet clear how lucrative Donbas would be for North Korea.

Russia is short of cash, battered by Western sanctions targeting its financial institutions and a broad swath of industries. North Korea likely has no interest in being paid in rubles because of worries about the currency’s purchasing power, which bottomed out during the war’s early days before Moscow took steps to artificially restore its value.

North Korea might be willing to be compensated with food, fuel and machinery, an exchange that would likely also violate Security Council sanctions, Lim said.

“The United States’ strategic competition with China and confrontation with Russia have given North Korea breathing room as it steps up to join Moscow and Beijing in a united front to counter U.S. influence and promote a multipolar international system,” Hong said.

North Korea has already used the war in Ukraine to ramp up its weapons development, exploiting divisions in the Security Council, where Russia and China in May vetoed a U.S.-backed resolution to tighten sanctions on North Korea over its revived ICBM testing this year.

North Korea has repeatedly blamed the United States for the Ukraine crisis, saying the West’s “hegemonic policy” justifies military actions by Russia in Ukraine to protect itself.

Russia, meanwhile, has repeatedly condemned the revival of large-scale military exercises between the U.S. and South Korea this year, accusing the allies of provoking North Korea and aggravating tensions.

Alexander Matsegora, Russia’s ambassador to North Korea, has backed its dubious assertion that its COVID-19 outbreak was caused by South Korean activists who flew anti-North Korean leaflets and other materials across the border with balloons.

Nam Sung-wook, a professor at the unification and diplomacy department of South Korea’s Korea University, is one of the few experts who sees the labor exports beginning soon.

Desperate to address its economic woes, North Korea might send small groups of workers to Donbas on “scouting missions” over the next few months and gradually increase the numbers depending on how the war goes, he said.

“Interests are aligning between Pyongyang and Moscow,” Nam said. “One hundred or 200 workers could eventually become 10,000.”