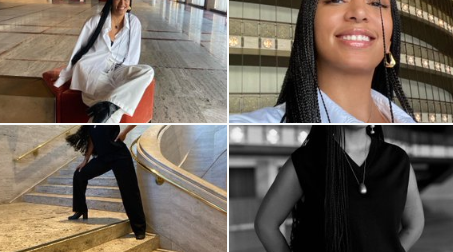 Solange Knowles is composing an original piece for the New York City Ballet, the singer announced on Tuesday. She is the third woman, and just the second Black woman, to have a score commissioned by the ballet.

Knowles said the piece will accompany choreography by Gianna Reisen – who, at 18 years old, became the youngest person ever to choreograph for the ballet in 2017, according to Playbill.

The composition will debut at the ballet’s annual Fall Fashion Gala on Sept. 28 at Lincoln Center. The event will be chaired by Laverne Cox and Andy Cohen, among others, and will honor actress Sarah Jessica Parker, who serves as the ballet’s vice chair.

The piece will also be performed at four shows in October and five in May.

“The score is composed for a chamber ensemble that will be made up of some of Solange’s musical collaborators and members of the City Ballet orchestra,” according to the New York Times.

In 2021, Lido Pimienta, who composed “sky to hold,” was the first Black woman to create a score for the ballet, a spokesperson for the ballet said in a statement to CBS News Wednesday.

“I am beyond proud of Solange,” Knowles’ mother, Tina Knowles-Lawson, wrote on Instagram Monday. “She is always kicking down doors and opening doors for other artists of color.”

Over the course of her decades-long career in the music industry, Knowles has released four solo studio albums. Her first studio album came out when she was just 16 years old, and her first Top 10 album, “Sol-Angel and The Hadley St. Dreams,” followed six years later, according to the Grammy Awards website. Her 2016 album, “A Seat at the Table,” was No. 1 on the Billboard 200. The album’s lead single, “Cranes in the Sky,” won a Grammy for Best R&B Performance. It was Knowles’ first Grammy nomination and first win.