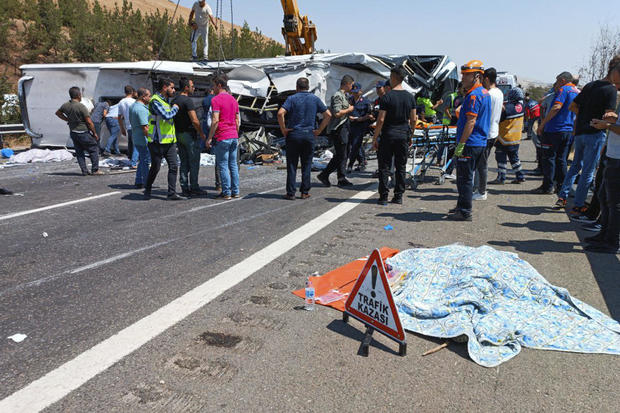 At least 31 people were killed and dozens more injured in two separate bus and truck crashes in southern Turkey Saturday.

In the first incident, near the city of Gaziantep, a passenger bus collided with emergency teams handling an earlier road accident, leaving at least 15 people dead and nearly two dozen injured, officials said.

Three firefighters, two paramedics and two journalists were among those killed on the highway between Gaziantep and Nizip, Interior Minister Suleyman Soylu tweeted. The other eight fatalities were on the bus, he added. Gaziantep Gov. Davut Gul said 22 other people were injured.

The Ilhas News Agency said two of its journalists were killed after pulling over to help the victims of the initial accident, in which a car came off the highway and slid down an embankment.

Television footage showed an ambulance with severe damage to its rear while the bus lay on its side alongside the highway.

Several hours later, the BBC reports, a truck crashed into a crowd of people in the town of Derik, about 150 miles from the first incident. At least 16 people were killed and 29 hurt in that collision, Turkish Health Minister Dr. Fahrettin Koca tweeted.

The truck careened into the crowd after its brakes failed, Koca said.

Turkey has a poor record of road safety. Some 5,362 people were killed in traffic accidents last year, according to the government.