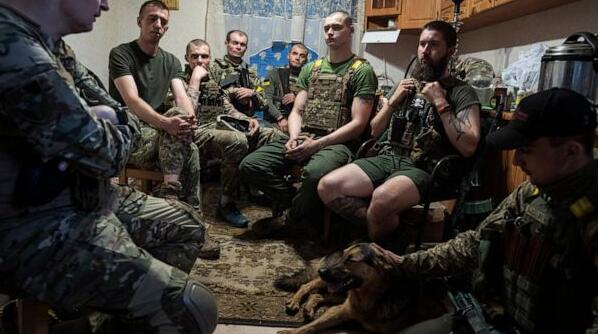 KYIV, Ukraine — Russian missile strikes in Ukraine’s southern city of Mykolaiv killed at least five people, Ukrainian authorities said Wednesday, part of a series of artillery and missile barrages across the country in the past day that left at least 10 dead and dozens wounded in eastern and southern regions.

While Mykolaiv has repeatedly been the target of Russian fire in recent days, Russian missiles also struck the city of Zaporizhzhia on Wednesday, an attack that could signal Moscow’s determination to hold onto territory in Ukraine’s south as it aims to fully conquer the east. Ukrainian forces have stepped up actions in a bid to reclaim more territory in the south.

Also Wednesday, the top U.S. diplomat accused Russia of committing a “war crime” by forcibly deporting hundreds of thousands of Ukrainian men, women and children to Russia with the intention of changing Ukraine’s demographic makeup.

Some of the civilian deaths occurred in the Donetsk province, which is part of a region the Kremlin is intent on capturing. The city of Bakhmut faced particularly heavy shelling as the current focus of Russia’s offensive, Donetsk Gov. Pavlo Kyrylenko said.

In the adjacent Luhansk province, which Russian and separatist forces have all but conquered, Ukrainian soldiers battled to retain control of two outlying villages as they came under Russian shelling, Gov. Serhiy Haidai said.

Luhansk and Donetsk together make up the Donbas region, a mostly Russian-speaking region of steel factories, mines and other industries.

The Russians are “deliberately turning Donbas into ashes, and there will be just no people left on the territories captured,” Haidai said.

With Russia’s sights set on the east, the Ukrainian military has tried to reclaim a captured city in the south. More Ukrainian missiles rocked Nova Kakhovka, a city east of the Black Sea port of Kherson, on Wednesday night, a day after the Ukrainian military claimed to have used missiles to destroy a Russian ammunition depot there. Russia said a mineral fertilizer storage facility had exploded.

In the Russian attack on the southern city of Zaporizhzhia, two cruise missiles hit a factory and wounded 14 people, Ukrainian officials said. The regional governor posted a photo showing the rubble. The UNIAN news agency said the factory management had evacuated the staff to bomb shelters, which it said may have saved their lives.

“Russian authorities must release those detained and allow Ukrainian citizens forcibly removed or coerced into leaving their country the ability to promptly and safely return home,” Blinken said in a statement.

Blinken said an estimated 900,000 to 1.6 million Ukrainian citizens — including 260,000 children — have been interrogated, detained and deported to Russia, with some sent to the country’s far east.

Blinken cited mounting evidence that Russian authorities are detaining, torturing or “disappearing” thousands of Ukrainian civilians who Russia considers a threat because of their potential ties to the Ukrainian army, media, government or civil society groups. Some Ukrainians, according to reports, have been summarily executed.

“President Putin and his government will not be able to engage in these systematic abuses with impunity. Accountability is imperative,” said Blinken. “The United States and our partners will not be silent. Ukraine and its citizens deserve justice.”

Meanwhile, Ukrainian and Russian officials met face-to-face Wednesday for the first time in months. Military delegations from the two countries, along with Turkish and U.N. officials, discussed a potential deal to get grain out of Ukraine’s blockaded and mined ports through the Black Sea.

Ukraine is one of the world’s largest exporters of wheat, corn and sunflower oil, but Russia’s invasion has halted shipments, endangering food supplies in many developing countries and contributing to higher global prices.

— The leader of a Moscow-backed separatist government in eastern Ukraine’s Donetsk province said foreign fighters convicted of terrorism and trying to overturn constitutional order for helping Ukrainian troops have appealed their death sentences. If the court rejects the appeals, two British men and a Moroccan could face a firing squad. Donetsk separatist leader Denis Pushilin said about 100 members of a Ukrainian National Guard battalion captured after the fall of Mariupol were scheduled to appear before a court soon.

— North Korea recognized the independence of the Donetsk and Luhansk regions, joining just Russia and Syria that have done so. North Korea’s state media said the country’s foreign minister conveyed to the leaders of the breakaway regions the North’s willingness to develop diplomatic relations. Ukraine’s Foreign Ministry cut off diplomatic ties with North Korea in response. Political and economic contacts were suspended earlier due to sanctions over North Korea’s nuclear weapons program. Separatists have controlled parts of both the Donetsk and Luhansk provinces since 2014, but Putin recognized their independence only shortly before the invasion began in February.

— The United Nations refugee agency reported that most Ukrainian refugees want to return home but plan to wait until the war subsides. Nearly two-thirds plan to stay put in their host countries for now. The vast majority of refugees from Ukraine are women and children. The U.N. agency’s findings came in a survey based on 4,900 interviews with refugees in the Czech Republic, Hungary, Moldova, Poland, Romania and Slovakia.

— Ukraine’s emergency services agency said the death toll from a weekend Russian airstrike in the Donetsk town of Chasiv Yar rose to 47. Rescue crews continued searching for survivors Wednesday in the rubble of three apartment buildings hit by Russian missiles on Saturday.