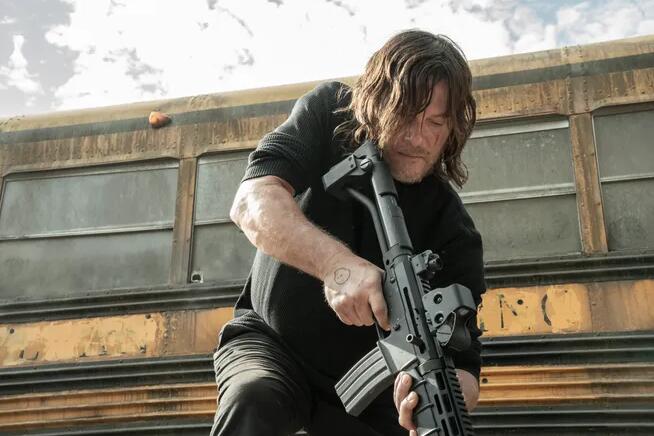 There weren’t any zombies but plenty of tears, memories, hugs and high-fives – plus a couple of surprises – as stars of “The Walking Dead” previewed its final eight episodes of a long 11-season run at Comic-Con.

“It’s not our show. It’s our show,” star Norman Reedus said, referencing the devoted crowd at the Friday panel. The famed pop-culture convention has been a frequent stop for the AMC apocalypse drama over the years that now nears its end: The last batch of episodes is scheduled to air beginning Oct. 2.

But even though the main show is ending, the “Walking Dead” universe is expanding and bringing back old friends. Lauren Cohan and Jeffrey Dean Morgan are currently filming the spinoff “Isle of the Dead,” which airs next year and features Cohan’s Maggie and Morgan’s Negan facing the undead in what’s left of New York City, and Andrew Lincoln and Danai Gurira surprised the Comic-Con crowd with the announcement of a new six-episode series premiering on AMC+ in 2023. (Lincoln’s Rick Grimes was last seen being taken away in a helicopter in Season 9, and Gurira’s Michonne went searching for him.)

“I personally can’t wait to get my cowboy boots back on and get the band back together,” said Lincoln, one of the original “Walking Dead” cast members alongside Reedus and Melissa McBride.

Much of the gathering, however, featured “Walking Dead” stars remembering their final days on set and favorite members over 11 seasons but also thanking fans for their support. “Without you guys, we wouldn’t be here,” said Reedus, who plays Daryl Dixon. “What you feel for us, we feel for you.”

Reedus admitted that it was “a very emotional time” filming his last scene before wrapping, and Seth Gilliam (who plays Father Gabriel) said actors would make sure to stop by for cast members’ death scenes and “that same vibe came back, with people coming back to show up for someone’s last day and show them some love.”

Comic-Con:‘Lord of the Rings: The Rings of Power’ storms in with ‘serious’ dwarves, epic trailer

Deaf actress Lauren Ridloff, who first appeared as Connie on “Walking Dead” in its ninth season Season 9 and has since starred in Marvel’s “Eternals,” was a fan of the zombie show – when she was a kindergarten teacher – before she became a part of it.

“I haven’t felt I left the classroom. I felt the classroom just got much bigger,” she said through an American Sign Language interpreter. “We watch ‘The Walking Dead’ because it’s been so important over the years and it can be a reflection of our day-to-day lives.

“When COVID happened, a lot of people started asking me for advice. How do you survive? See, still a teacher.”

McBride, who plays Carol, got emotional talking about her time on the show: “This whole experience has need amazing, out of this world, never thought it would become what it became. I’m just so grateful.”