Students in Iran say they will continue to protest despite warnings, threats from regime 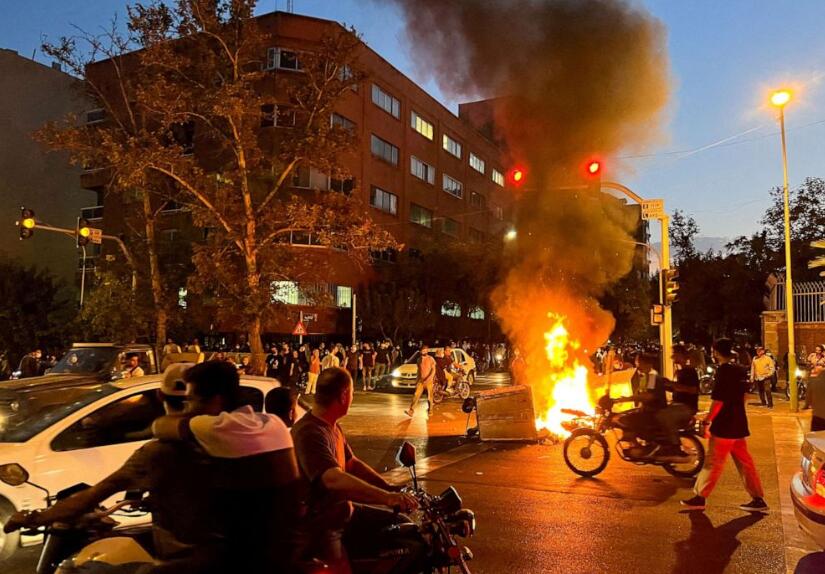 Students say they no longer feel safe in school.

As nationwide protests in Iran are being violently suppressed by the government, many students across the country are joining the movement — an act of defiance that has come with retaliation.

This week, police and plainclothes security forces raided schools in different cities to arrest students who had participated in protests. Their crime? Taking off their headscarves at school, tearing up photos of government leaders and chanting “death to dictator.”

Protests in Iran started following the mysterious death of Mahsa Amini, a 22-year-old woman who died Sept. 16 while in custody of the morality police after she was arrested for not wearing a hijab properly. The demonstrations have turned into a movement, with many protesters now calling it a “revolution” that aims to end the current Iranian regime.

Large numbers of teens and students have been participating in the protests, according to eyewitness accounts and videos shared on social media.

Some of the protesting students told ABC News they feel “no fear” when protesting with their peers.

“We can’t just go to the class pretending like these are normal days,” said a high school student from a town close to Tehran who spoke to ABC News but asked that her real name not be used due to security concerns.

“We know other people, other teenagers like us are being killed by the regime,” she said.

The teen, who ABC News is calling Mobina, also talked about the 16-year-old vlogger and protester Sarina Esmailzadeh who died after allegedly being beaten in the head with batons, according to Amnesty International.

Another 16-year-old, Nika Shakarami, went missing for eight days after protesting in Tehran. Her mother said that she was seen burning her headscarf in street protests before she died at the hands of security forces. Iranian authorities are blaming both teens’ deaths on suicides.

Concerned about their security, Mobina and fellow students decided to show their solidarity by chanting slogans and singing songs in the school yard.

“We thought school would be a safe place compared to the risks of the crackdown on street protests like being shot, tear-gassed, beaten or arrested by the police,” Mobina said. But, five minutes into chanting and singing, local education authorities arrived followed by police and plainclothes security guards, according to Mobina.

“At that moment, we were scared. Seeing the police in the class and knowing that our principal had reported on us,” she said.

When Mobina and her friends went to the teachers room to find out what happened to their friends, they were asked to immediately leave the school.

“We resisted and then a policewoman came and said if we would not leave, they would arrest us too,” Mobina said.

“If [students] are detained in some cases, it is for their upbringing and amending,” Nouri told Shargh News Daily on Tuesday. “In such a situation, these students may become antisocial characters and we want to fix them.”

He did not say how many students have been arrested but noted “they will return to school after learning their manners.”

Parents of an elementary school child told ABC News on Sunday that plainclothes officers have gone to local schools checking students’ books and warned those who had torn off pictures of regime leaders from their books. Other sources said school principals have shortened the break time between classes to 10 minutes to prevent any school protests.

According to a recent report from Iran Human Rights, at least 201 people have been killed in the nationwide protests since they started on Sept. 17 and 23. The Children Rights Association, an Iranian NGO, said at least 28 of those killed were children.

“These people are mostly women and they are mostly young … and they go and they fight back and they scream at the police and they are not scared of anything. And that’s beautiful,” said one female protester who did not want her name to be mentioned for security reasons.

Some, however, have concerns about the rampant violence against children. The Children Rights Association said the consequences of “arrest, transfer and detention, and, as a result, imposing the process of trial and prison” imposes “destructive physical, mental and psychological effects” on this age group.

Neither the risks nor warnings, however, are stopping the young protesters.

“We want regime change and we don’t want this government to be here anymore,” one protester said. “I’m very hopeful for this change. I think we can win this. I think it’s going to end well for Iran and for the women of Iran.”

First lady Jill Biden and Michelle and Barack Obama have released statements in support of the young women who are protesting in Iran.