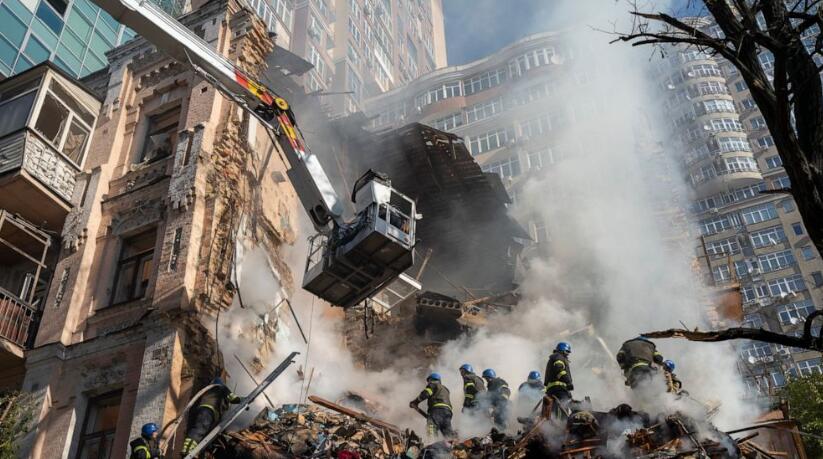 JERUSALEM — The Iranian-made drones that Russia sent slamming into central Kyiv this week have complicated Israel’s balancing act between Russia and the West.

Israel has stayed largely on the sidelines since Russia’s invasion of Ukraine last February so as not to damage its strategic relationship with the Kremlin. Although Israel has sent humanitarian aid to Ukraine, it has refused Kyiv’s frequent requests to send air defense systems and other military equipment and refrained from enforcing strict economic sanctions on Russia and the many Russian-Jewish oligarchs who have second homes in Israel.

But with news of Moscow’s deepening ties with Tehran, Israel’s sworn foe, pressure is growing on Israel to back Ukraine in the grinding war. Israel has long fought a shadowy war with Iran across the Middle East by land, sea and air.

“We’re looking at it closely and thinking about how these can be used by the Iranians toward Israeli population centers,” he said.

The debate burst into the open on Monday, as an Israeli Cabinet minister called on the government to take Ukraine’s side. Iran and its proxies in Lebanon, Syria, Iraq and Yemen have threatened Israel with the same delta-shaped, low-flying Shahed drones now exploding in Kyiv.

The Iranian government has denied providing Moscow with the drones, but American officials say it has been doing so since August.

“There is no longer any doubt where Israel should stand in this bloody conflict,” Nachman Shai, Israel’s minister of diaspora affairs, wrote on Twitter. “The time has come for Ukraine to receive military aid as well, just as the USA and NATO countries provide.”

His comments set off a storm in Russia. Former Russian President Dmitry Medvedev said on Telegram that providing military aid to Ukraine would be “a very reckless move” by Israel.

“It will destroy all interstate relations between our countries,” he wrote.

But Shai doubled down on Tuesday, while stressing his view did not reflect the government’s official stance.

“We in Israel have a lot of experience in protecting our civilian population over 30 years. We’ve been attacked by missiles from Iraq and rockets from Lebanon and Gaza,” Shai, a former military spokesman, told The Associated Press. “I’m speaking about defense equipment to protect Ukraine’s civilian population.”

The Israeli prime minister’s office and Defense Ministry both declined to comment.

Israel has also been keen to stay neutral in the war over concern for the safety of the large Jewish community in Russia. Israel frets about renewed antisemitic attacks in the country, with its long history of anti-Jewish pogroms under Russian czars and purges in the Soviet era. Over 1 million of Israel’s 9.2 million citizens have roots in the former Soviet Union.

Israel’s former Prime Minister Naftali Bennett maintained strict neutrality after the invasion, refraining from condemning Russia’s actions and even trying to position himself as a mediator in the conflict. As the U.S. and European Union piled sanctions on Russia, Bennett became the only Western leader to meet Russian President Vladimir Putin in Moscow.

Prime Minister Yair Lapid, who took over as caretaker leader over the summer, has been more vocal than his predecessor. As foreign minister, he described reports of atrocities in Bucha, Ukraine as possible war crimes. After Russia bombarded Kyiv last week, he “strongly” condemned the attacks and sent “heartfelt condolences to the victims’ families and the Ukrainian people,” sparking backlash from Moscow.

Tensions rose further when a Russian court in July ordered that the Jewish Agency, a major nonprofit that promotes Jewish immigration to Israel, close its offices in the country. Israel was rattled. A hearing to decide the future of the agency’s operations in Russia is set for Wednesday. “Anything could happen,” said Yigal Palmor, the agency’s spokesman.

Now, Israeli alarm about the Iranian drones buzzing over Kyiv has heightened the debate.

“I think Israel can help even more,” said Amos Yadlin, a former chief of Israeli military intelligence. He described Israel’s “knowledge on how to handle aerial attacks,” its “intelligence about Iranian weapons” and “ability to jam them” as potentially crucial to Ukraine.

Iran is battle testing weapons that could be used against Israel’s northern and southern borders, argued Geoffrey Corn, an expert on the law of war at South Texas College of Law in Houston.

Iran backs Lebanon’s Hezbollah militant group and Hamas in the Gaza Strip — both of which have fought lengthy wars against Israel.

If the drones prove effective in Ukraine, Iran will “double down on their development,” Corn said. If they are shot down, Iran will have an “opportunity to figure out how to bypass those countermeasures.”

Israel’s air defense system, the Iron Dome, has boasted a 90% interception rate against incoming rocket fire from Gaza. Ukrainian President Volodymyr Zelenskyy has hit out at Israel for not providing Kyiv with the anti-rocket system.

Former Jewish Agency Chairman Natan Sharansky, a onetime Soviet dissident, criticized his country’s reluctance to help Ukraine in an interview with the Haaretz daily on Tuesday, deriding Israel as “the last country in the free world which is still afraid to irritate Putin.”

Still, some insist that Israel must not enter the fray precisely because it differs from its Western allies.

“We are not Germany or France,” said Uzi Rubin, a former head of Israel’s missile defense program. “We are a country at war.”