EXPLAINER: Why is Japan split over Abe’s state funeral? 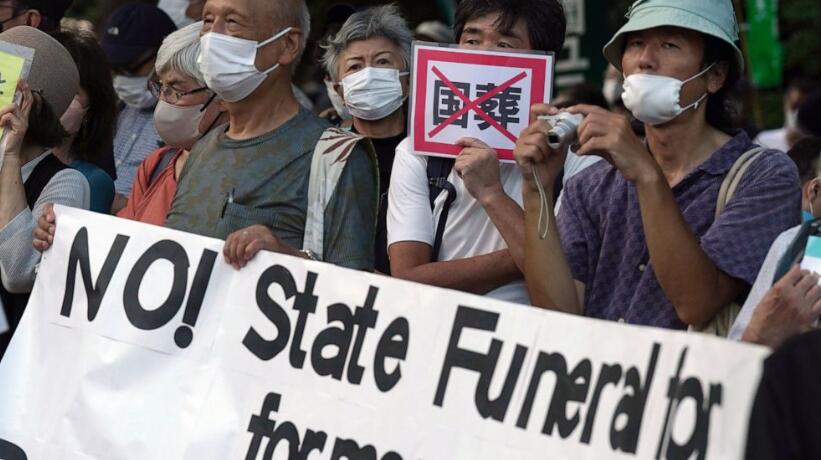 A rare state funeral for Shinzo Abe, the former prime minister who was assassinated in July, has split Japan

TOKYO — A rare state funeral for Shinzo Abe, the former prime minister who was assassinated in July, has split Japan.

The hawkish Abe was one of the nation’s most divisive postwar leaders, but it is the ruling party’s cozy ties with the ultra-conservative Unification Church that has fired up much of the opposition to the funeral.

Prime Minister Fumio Kishida is battling a near-continuous political fallout from his handling of both the links to the church among his party’s lawmakers and the state funeral he says Abe deserves.

WHO GETS A STATE FUNERAL IN JAPAN?

The tradition has roots in a ceremony performed by the emperor to honor those who made exceptional contributions to the country.

The emperor before World War II was revered as a god, and public mourning for those honored with state funerals was compulsory. Most state funerals were for members of the imperial family, but political and military leaders were also honored, including Isoroku Yamamoto, who commanded Japan’s Pearl Harbor attack and died in 1943.

The state funeral law was scrapped after the war. Japan’s only other state funeral for a political leader since then was held in 1967 for Shigeru Yoshida, who signed the San Francisco Treaty ending the U.S. occupation of Japan and restoring ties with the Allies.

Because of criticism that the Yoshida funeral was held without any legal basis, subsequent governments scaled down such events.

“A state funeral contradicts the spirit of democracy,” said Junichi Miyama, a historian at Chuo University.

WHY IS ABE GETTING A STATE FUNERAL?

Kishida says Abe deserves a state funeral because he was the longest-serving leader in Japan’s modern political history and for his diplomatic, security and economic policies that elevated Japan’s international profile. Kishida, noting Abe’s assassination during an election campaign, says Japan must show its determination never to bow to “violence against democracy.”

Political watchers say holding a state funeral for Abe is Kishida’s attempt to please ruling Liberal Democratic Party lawmakers belonging to Abe’s conservative political faction so as to buttress his own grip on power.

Koichi Nakano, international politics professor at Sophia University, says the funeral is an attempt to whitewash Abe’s legacy and to cover up scandals linked to the Unification Church. The church is accused of inappropriate recruitment and business tactics but denies the charges.

WHY IS IT CONTROVERSIAL?

Opponents say it’s undemocratic, citing a lack of a clear legal basis and the unilateral decision by the Kishida Cabinet to hold the funeral.

Abe’s opponents recall his attempts to whitewash Japan’s wartime atrocities, his push for more military spending, his reactionary view of gender roles and a leadership seen as autocratic and supportive of cronyism.

Protests of the funeral have increased as more details emerged about Abe’s and LDP lawmakers’ connection to the Unification Church. The South Korea-based church has built close ties with LDP lawmakers over shared interests in conservative causes.

Abe’s assassin reportedly was enraged about ties between Abe, his party and the church, which he said his mother had given all the family’s money to.

Abe, whose grandfather and former leader Nobusuke Kishi helped the church to take root in Japan, is now seen as a key figure in the scandal. Opponents say holding a state funeral for Abe is equivalent to an endorsement of party ties to the Unification Church.

A group of lawyers filed a lawsuit trying to stop the funeral, but it was reportedly dismissed Monday. And an elderly man had set himself on fire near the prime minister’s office in an apparent protest of the funeral.

About 1.7 billion yen ($11.8 million) is needed for the venue, security, transportation and accommodation for the guests, the government said. Opponents say tax money should be spent on more meaningful causes, such as to address widening economic disparities caused by Abe’s policies.

WHAT ARE THE IMPLICATIONS FOR KISHIDA?

Kishida, who took office a year ago, had enjoyed stable public support, with his July election victory seemingly securing him a way to rule for up to three years.

But his support ratings have since plunged over his handling of the state funeral and his governing party’s links to the South Korean church.

An LDP survey found nearly half of its lawmakers had ties to the church. Kishida has pledged to all ties, but many Japanese want a further explanation of how the church may have influenced party policies.

WHAT WILL HAPPEN AT THE FUNERAL?

Guests will gather hours ahead of the funeral at the Budokan martial arts arena in downtown Tokyo for security checks, which have been tightened after Abe’s assassination. No food or drinks are allowed inside, and use of personal computers or cameras are limited to media. About 1,000 Japanese troops will line the streets around the venue. The ceremony will start with a 19-volley salute, as in Yoshida’s funeral.

Government, parliamentary and judicial representatives, including Kishida, will make condolence speeches, followed by Abe’s widow, Akie Abe. Outside the arena, a table for flowers will be set up for the public.

The government says the funeral is not meant to force anyone to honor Abe. But most of the nation’s 47 prefectural governments will fly the flag at half-mast and observe a moment of silence, which could put pressure on public schools. Residents and offices near the venue will be affected by traffic controls and security checkpoints, and classes will be canceled at some neighborhood schools.

Opponents will hold rallies around the country.

U.S. Vice President Kamala Harris as well as the leaders from Australia, India, Vietnam, Cambodia and Singapore will be there. Kishida says the event will provide an opportunity for him to engage in “funeral diplomacy.”

The government said last week 4,300 attendants, including foreign dignitaries, Japanese lawmakers, municipal leaders and representatives from business, cultural and other areas, are attending — fewer than the 6,000 invited.

Many opposition members, including the main opposition Constitutional Democratic Party of Japan and the Japanese Communist Party, are boycotting the funeral. A former minister in the governing party will also stay away.